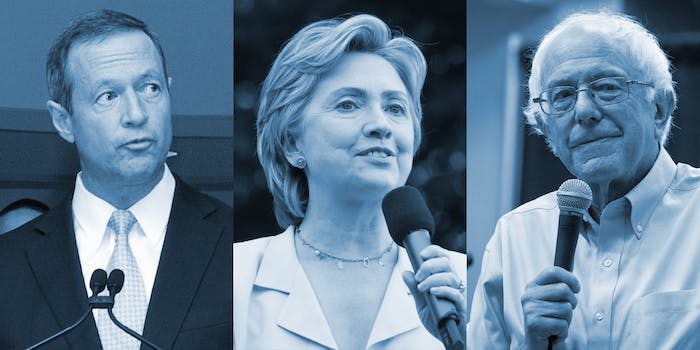 Everything you need to know about Saturday’s Democratic debate

Yes, it's on a Saturday.

What’s a better way to spend a Saturday night than joining your fellow Americans for two hours of stage-managed democracy?

If your answer is “anything,” you’re probably not alone. But that still won’t stop the 2016 Democratic contenders from taking the stage in Des Moines, Iowa, on Nov. 14 for the second Democratic presidential debate of the election season. Here’s what you need to know.

When is the next Democratic debate?

The event starts at 9pm ET on Saturday. It’s being held at Drake University’s Sheslow Auditorium.

Who’s in the Democratic debate?

Can I stream the debate?

Yes! And you don’t even have to have a cable subscription. This debate will be hosted by CBS News, and it will air on CBS (check your local channel listings) and stream for free on the CBS News website.

How long will the debate last?

It’s scheduled to last two hours. Each candidate will be given 60 seconds to respond to questions, 30 seconds for rebuttals, and 60 seconds for their closing statements.

Who are the moderators?

What will the debate cover?

Expect questions to turn to Paris, where at least 128 people died on Friday in a series of deadly attacks that rocked France’s capital and added renewed energy to the debate over Islamic terrorism. Because of the freshness of this story, it is likely the debate moderators will put special focus on how the Democratic candidates would handle such a scenario if elected commander-in-chief.

Beyond that, the questions will likely span the standard topics: economy, healthcare, climate change, and education.

Why are they holding a debate on a Saturday?

Good question. Some Democratic Party members reportedly believe, according to Time, that Democratic National Committee Chair Debbie Wasserman Schultz intentionally scheduled the debates at times when viewership would likely be low to help shield Clinton from moments when she might look bad. Whether that’s actually true is not confirmed, though both the Washington Post and Politico have reported that the Clinton campaign urged the DNC to hold only a few primary debates.

Both Sanders and O’Malley criticized the Democratic debate schedule, and they have called for more debates. (There are only six Democratic primary debates this election cycle, compared to 20 during the 2008 primary.) Wasserman Schultz has dismissed accusations of rigging the debate schedule in Clinton’s favor.

OK, but this is the only one on a weekend, right?

Nope. The next two Democratic primary debates are also scheduled for weekend days: Saturday, Dec. 19; and Sunday, Jan. 17. The remaining two debates will be held in either February or March, but the exact dates have yet to be announced.

As Vox reports, this is quite odd: Only seven out of 100 debates held since 2000 have landed on a Saturday.