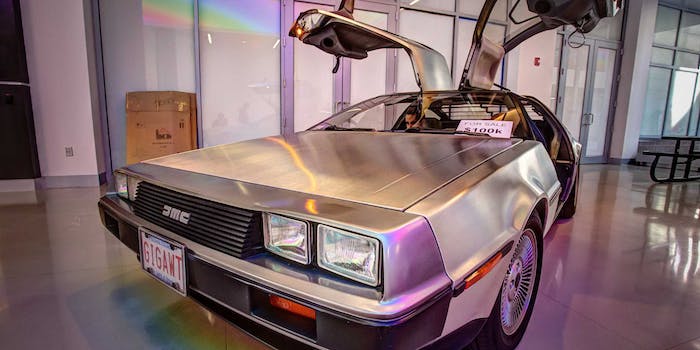 Photo via Robbie Shade/Flickr (CC BY 2.0)

The classic DeLorean is now back in production

Everything old is new again.

We still don’t have the hoverboard Back to the Future promised, but here’s a worthy consolation prize: the DeLeorean Motor Company is putting the beloved car back into production.

Production plans for the car won’t fill the roads with the retro-futuristic machine—at least not at first. The company plans to build about 300 cars at to start. Ramp-up will be slow, starting at a production level of one per month, but eventually company CEO Stephen Wynne wants to make one per week.

For those hoping to get their hands on the classic vehicle, their credit score will have to be just as strong as their itch for ’80s nostalgia. This new, replica model of the classic DeLorean will be priced at around $100,000.

It’s been over 30 years since the original DeLorean rolled off the lot. Despite the popularity of the Back to the Future films that featured the vehicle prominently as the time-traveling vessel for Doc Brown and Marty McFly, DeLorean closed up shop in 1982 due to poor sales and insufficient cash flow.

The company behind the new version isn’t the same group responsible for the original iconic car. Wynne took up the DMC mantle in 1995, but has no relation to the defunct DeLorean Motor Company. He has been doing his best to maintain the legacy of that company, though, including refurbishing many originals.

Thanks to Wynne’s claim to all of the remaining parts made for the DeLorean and a dedicated community of enthusiasts and drivers, about 6,500 of the original run of 9,000 have survived the ravages of time.

Last year, Wynne settled a lawsuit out of court with the estate of original company founder John DeLorean. The agreement granted Wynne’s DMC the rights to use the DeLorean Motor Company name, trademarks, and logo. With those rights in hand, the refresh of the DeLorean can officially claim a connection to its ancestry.

At around the same time, Wynne was waiting on a bill to pass through the United States House and Senate that would allow for low-volume production of replicas. “Assuming that makes it this year, next year, then we’re back in business,” Wynne told the Daily Dot in an interview last year. That initiative indeed passed and the car is now ready to return, with some modern touches expected along the way.

The first of the new DeLoreans is expected to roll off the assembly line early next year.