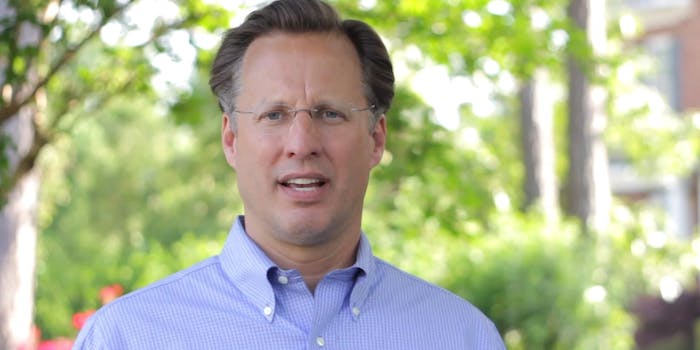 We don't know much—but we do know economics professor Dave Brat is against NSA spying.

As political strategists scratch their head at how unknown economics professor Dave Brat was able to upset sitting House Majority Leader Eric Cantor (R-Va.) in the primaries—the first time that’s happened since 1899—they could start with National Security Agency spying.

Brat, as you’ll soon be repeatedly reminded, was so little-known that his Wikipedia entry only had two lines before Tuesday. But in line with his Tea Party credentials, he was quick to brand himself a true constitutional conservative, rather than a party line-towing Republican. On the “issues” section of his website, for example, Brat noted that in line with the constitution’s Fourth Amendment, he “supports the end of bulk phone and email data collection by the NSA.”

Cantor, by contrast, has stood up for the agency. In the hubbub of confusion after former NSA systems analyst Edward Snowden first leaked a trove of agency documents, Cantor was more interested in investigating Snowden himself than agency programs, which he defended as in place to “guard against a terrorist threat.”

As Brat’s website points out, Cantor also voted against a narrowly-defeated amendment proposed by Justin Amash (R-Mich.)—who will likely be fast friends with Brat in the House—to defund the NSA’s program of collecting Americans’ phone records in bulk.

“Dave believes that the Constitution does not need to be compromised for matters of national security,” his site says.