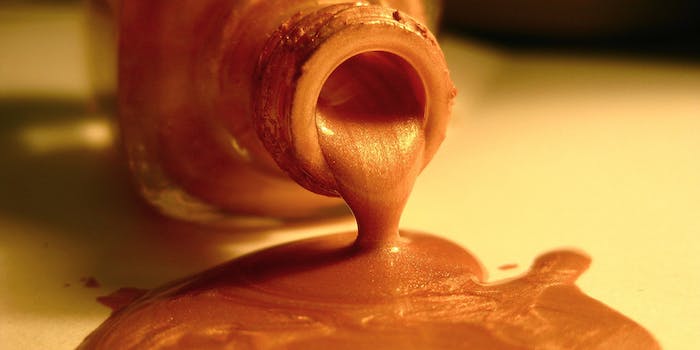 The problem with that date-rape-preventing nail polish? It might not work

According to Backdoor Pharmacist, a columnist over at the blog Animal New York, the technology behind the date rape-preventing nail polish hasn’t actually proven effective. Instead, the nail polish, as well as other date rape drug-detecting devices, “exist in a fantasy world of stranger danger pill-packing predators and irresponsible victims,” thanks to the media heralding them as the next wave of sexual assault prevention.

Basically, Backdoor Pharmacist says that the science behind the date rape-drug detecting nail polish, as well as similar inventions that purport to screen for drugs like rohypnol or GHB, is faulty and unreliable. A study of commercial date rape drug-detecting drink coasters, for instance, found that they were prone to giving false positives, and changed color not just for date rape drugs, but for various brands of mineral water.

“These testing kits are a false panacea,” Backdoor Pharmacist writes. “If GHB, roofies, and ketamine disappeared, date rape would still exist. Trying to solve a social problem of date rape with questionable technology is a band-aid.”

There’s also the question of how common GHB- or rohypnol-induced date rape is. According to a 2007 study, it’s fairly rare. Alcohol, not so-called date rape drugs, is by far the most common substance found in date rape victims’ urine samples, with 60 percent of date rape victims testing positive for alcohol after they’ve been assaulted. That figure is in stark contrast to the 3 percent of urine samples which featured the presence of drugs like GHB or rohypnol, which the Undercover Colors nail polish would ostensibly test for.

Of course, that’s not to say that drug-induced date rape doesn’t happen, or that you shouldn’t be extra-vigilant when you’re setting your drink down at a bar. But considering that, according to current sexual assault statistics, you’re far more likely to be assaulted by a friend or acquaintance than a random, roofie-toting stranger, it makes sense why we should probably view devices like the anti-date rape nail polish not as “band-aids” to the general cultural problem of date rape, but as cool, yet potentially flawed, technological advances.

Backdoor Pharmacist isn’t the first person on the Internet to criticize the anti-date rape nail polish. Many feminist bloggers on Twitter also objected to the media’s coverage of the startup, arguing that the nail polish reinforces the idea that women are somehow responsible for protecting themselves against date rape. The focus, they argue, should not be on teaching women how to “prevent” date rape, but on teaching men not to rape at all:

This new nail polish that can detect the date rape drug is great if you think women aren’t trying hard enough not to get raped.

Is this what we’ve come to? It’s too hard to make men respect women’s boundaries so women must wear special rape-drug detector nail polish?

Of course, it’s not impossible to imagine a world where we can both teach men not to rape, and give women the tools they need to defend themselves against one particular form of sexual assault, however relatively uncommon it might be. But if current sexual assault stats and Backdoor Pharmacist’s argument against the effectiveness of date rape drug-detecting devices are any indication, we’re a long way from that world becoming a reality.