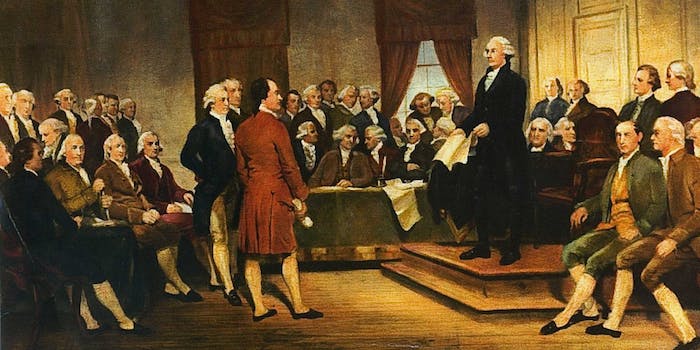 Here’s how many followers Rep. Darrell Issa lost for tweeting the entire Constitution

We hold these tweets to be self-evident.

Freedom. For as long as there has been freedom, there have been people who hate freedom—terrorists, Nazis, jerks who give you dirty looks for drinking a beer at a baseball game just because it’s Little League and all the players are 9. But freedom-haters have historically been difficult to quantify. Now, thanks to a brave political stunt undertaken by Republican Congressman Darrell Issa—or, at least one unlucky congressional intern—the world now has an exact count of how many people hate freedom.

In honor of Constitution Day on Wednesday, Issa took to Twitter to read the entire U.S. Constitution in 140-character bursts. In doing so, he lost at least 436 followers.

At the very least, that’s 436 people who would rather their Twitter feeds not be clogged up with a constant stream of riveting material like this:

Article XX. Section 1. The terms of the President and Vice President shall end at noon on the 20th day of January, and the terms of Senators

and the terms of their successors shall then begin.

He left nothing out. Even this part:

including those bound to Service for a Term of Years, and excluding Indians not taxed, three fifths of all other Persons.

Although, it’s shocking that Joe Biden didn’t retweet this one:

Issa’s project consisted of 462 tweets, meaning he lost about a one follower per tweet. By Thursday morning, however, his follower count had inched back up to 170,631.

Constitution Day is a federal holiday commemorating the ratification of the Constitution. No one gets the day off work. But, as per a law passed by Congress in 2004, all federal agencies have to mark the day by providing educational programming about the Constitution. Fun!

Now that Issa has completed his plan to weed out the America-haters among this Twitter followers, he can now go back to his regular schedule of sending out angry press releases and holding rage-filled hearings about things the Obama Administration did and just generally being part of the least productive Congress in history.

The typos aren’t part of the Constitution, btw. Hazard of so many tweets.