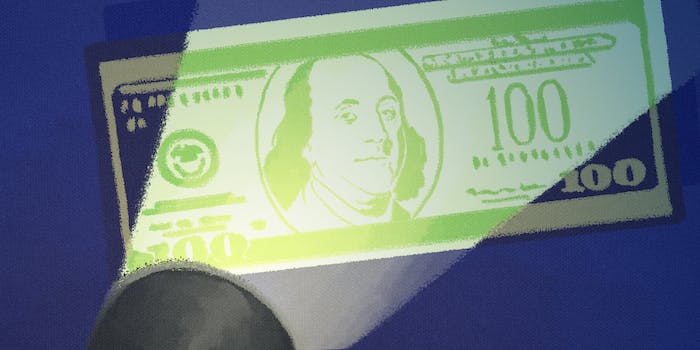 And why does it matter?

In the shadows of the 2016 election lurks a force so powerful you’d think it was impossible to miss—if only you could see it.

So-called “dark money” has become a problem in U.S. politics at the federal, state, and local levels, according to state legislators, who are pushing back against the influence of unaccountable funding in elections.

Even if you have never heard of dark money, you may have heard of the Koch brothers. Their network of 501(c)4 social-welfare groups, including Americans For Prosperity, was responsible for fully one quarter of the $300 million in dark money spent in the 2012 election, a number that is certain to be left in the dust as we barrel toward November 2016.

More than 100 bills have been introduced into state legislatures to address campaign finance reform, and a dozen are devoted to dark money specifically, according to the Sunlight Foundation, which has created an extensive dynamic listing of all these bills.

So, what is dark money, and why does it matter?

What is dark money?

As we’ve explained elsewhere, dark money is the political spending by tax-exempt 501(c)4 “social-welfare organizations.” These nonprofits have no obligation to reveal the source of their funding, which collectively rose from $6 million in 2004 to $309 million in 2012. This leads to large-scale influencing that is hidden from both the average voter and those we rely on to find and present issues of importance to voters, like journalists, academics, analysts, and activists.

“Requiring disclosure of the secret donors would take an act of Congress or an IRS rule change.”

Most state legislation addressing dark money are focused on “independent expenditures.” The Code of Federal Regulations defines this as “an expenditure by a person for a communication expressly advocating the election or defeat of a clearly identified candidate that is not made in cooperation, consultation, or concert with, or at the request or suggestion of, a candidate, a candidate’s authorized committee, or their agents, or a political party committee or its agents.”

Among those states currently pursuing dark-money regulation are Montana and Arizona.

In Montana, Senate Bill 289, which passed the legislature earlier this year, requires any group running campaign ads to disclose their largest donors. In Arizona, Senate Bill 1207, if it passes, will require disclosure of top donors for, as Sunlight puts it, “any group running ads that contain terms like ‘vote for’ or ‘vote against.’”

State and local elections for tend to be low money undertakings, Bender said. So in most districts, a couple thousand dollars can tip an election, as well as change the area’s campaign culture and practices. When these are dark, the source of this change is hidden.

“Electioneering communications are the target of legislation because they are where the majority of the spending takes place,” said Bender. “Requiring disclosure of the secret donors would take an act of Congress or an IRS rule change. But states are taking the lead in attempting to require this disclosure.”

The Sunlight Foundation seconded that sentiment.

“The amount of money flooding our elections and political system continues grow, and the amount of dark money is only increasing, as well,” Sunlight spokesperson Jenn Topper told the Daily Dot. “We think the public has a right to know who is behind the groups that are trying to influence voters and elected officials when they take office.”

So some states, such as Montana and California, have passed measures that are likely to force the question.

“Montana passed a Disclose Act measure last session that is aimed at requiring all politically active committees to disclosure their donors,” Bender told the Daily Dot. “It is in rule-making now, and is facing a legal challenge.” California was first to require politically focused 501(c)4 non-profits to disclose their donors, also in the rule-making stage.

The streams of force coming together against dark money are many, and their velocity is increasing. But the effects are likely to be messy.

“Public sentiment against anonymous, secret campaign spending is overwhelmingly negative,” said Bender. “Politicians on both sides of the aisle agree something needs to be done. Given the proper defining moment, such as a major scandal, disclosure could move quickly. Remember, back in the Reagan and Clinton days, 527 committees weren’t disclosing their donors. Clinton righted that, but only after taking advantage of it.”

Campaign finance is often portrayed as something to be fixed, an aspect of electoral life that a person or group should solve, quickly and permanently. But if, say, the entire history of American politics is any guide, it is an ongoing and dynamic process, like diplomacy.

While Americans may want above all to repair our system of electoral finance and be done with it, it is more likely that we will constantly battle for a fairer relationship between money and politics. The ongoing actions of state legislators and local activists are part of that struggle.

As Sunlight’s Topper put it, “By giving voters and the public access to information about who is trying to influence our elections, we’re empowering them to make a better informed decision, and to better hold their representatives accountable.”

This is not spiking the ball in the end zone. It’s a slog. But look back decades in the future, and this era might be seen as the point at which tolerance for dark money ran out.