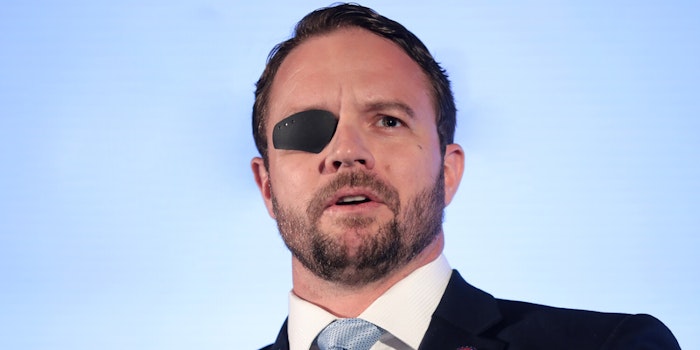 The lawmaker pushes back on gun control via Twitter.

Many conservative arguments about reforming America’s gun laws hinge on describing unlikely scenarios and declaring them indicative of how any action on gun laws could wreck a functioning society.

“My 83-year-old grandfather once used a shotgun to protect himself against a home invader in 1961 and if Democrats banned guns today, what’s stopping them from using a time machine to confiscate his weapon days before and have the Dutch Marina he wore in Korea stripped off his wrist?”

“I wouldn’t be able to let my friends borrow my handgun when they travel alone like this. We would make felons out of people just for defending themselves,” he tweeted.

Situations like this story are why we protect the 2nd Amendment.

Side note: With universal background checks, I wouldn’t be able to let my friends borrow my handgun when they travel alone like this. We would make felons out of people just for defending themselves. https://t.co/x60mdd1WW1

Critics on Twitter pushed back at Crenshaw and argued that the lax nature of American gun laws is a bigger problem than whether he can lend out his guns to friends.

Are you joking? You think lending your friends guns is not only an acceptable practice but one that should be preserved? That’s horrifying. I don’t have a driver’s license, so I don’t borrow and drive friends’ cars. If I did, I’d be a criminal. Cool how that works.

You let your friends borrow your handgun? Are you joking? https://t.co/eYkXZUYz36

Folks are just loaning their friends a gun whenever they want?

THAT SHOULD OBVIOUSLY BE STOPPED. https://t.co/uG0fizzDb1

"Hear me out: public libraries with guns instead of books" by Dan Crenshaw https://t.co/eh6n2YYBYL

Theoretically, Crenshaw could face civil liability or even criminal liability if his friend misused the gun. In practice, though, states usually shrug off even the most extreme owner negligence as part of the price of freedom https://t.co/kf7UafIYfb https://t.co/sSdY8KHERM

Even Rep. Alexandria Ocasio-Cortez (D-N.Y.) blasted Crenshaw, asking if he checked with any of his friends about their status to own a handgun.

You are a member of Congress. Why are you “lending” guns to people unsupervised who can’t pass a basic background check?

The people you’re giving a gun to have likely abused their spouse or have a violent criminal record, & you may not know it.

Why on earth would you do that? https://t.co/TQFjcLQebO

Crenshaw himself might want to take a look at federal law, which allows a temporary transfer of a gun for “sporting” use, but does not carve out an exemption for friends’ solo “travel.”