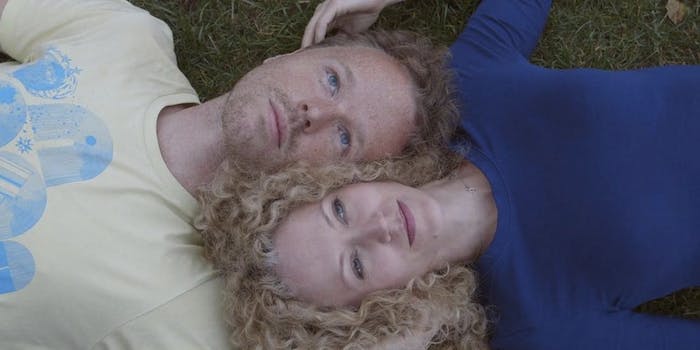 Cuddlr can’t take the creeps out of digital dating

Is Cuddlr an asexual, PG version of Tinder? I logged on to find out.

Looking for someone to snuggle up next to and keep warm with during this year’s polar vortex? Want to experience the warmth of a human body without the pesky PIV action? Download Cuddlr, the app that’s exactly what it sounds like: a Tinder for people who want to cuddle. Part social experiment, part-PG-rated hookup app, Cuddlr lets you log in through Facebook, peruse the names and faces on the app, and select someone in a few-mile radius you’d like to (platonically) cuddle with. It’s the digital equivalent of the guy who used to run around your college campus wearing a “Free Hugs” sandwich board.

According to creator Charlie Williams, the app is intended to get us to rethink the concept of physical intimacy in the digital age, while still remaining purely asexual. “Cuddlr is all about respecting and connecting, rather than looking and judging,” Williams told Salon when the app launched last week. While that very well might be true, the blogosphere has been skeptical toward the app, with many presuming that it’ll be used for hookups instead of platonic snuggles. The blog Styleite sniffed, “Maybe they should call it Creepr, instead.”

I, however, didn’t want to write off Cuddlr just yet. From covering love and dating apps, I know that everyone needs a little physical contact now and then, regardless of whether it’s sexual or not, and it seemed like a non-judgmental app like Cuddlr might be the perfect way to go about it. While I obviously had my reservations (Would there be a smell test cuddlers would be required to undergo prior to downloading the app? When looking for a stranger to cuddle with, a lack of malodorousness seems like a pretty strong prerequisite) I nonetheless decided to give it a whirl, with one caveat: My boyfriend didn’t feel comfortable with me getting up close and personal with any men on Cuddlr, so I promised I’d restrict my cuddle requests to members of my own gender.

(This is technically contrary to the spirit of Cuddlr, which doesn’t reveal users’ genders, presumably to highlight how platonic the act of cuddling is; it’s also contrary to my own impulse as a girlfriend, which is to do as much as possible to piss off my partner. But considering how I’d feel if the situation were reversed and it was his erection pressing into an anonymous woman’s butt crack, I figured I’d relax my “do things for the sole purpose of annoying Alex” stance and do him a solid this time around.)

When I downloaded Cuddlr, the first thing I realized was how incredibly streamlined and simple it was. For starters, the app just shows you potential cuddlers’ names and faces, instead of detailed profile information. If you send a request to a cuddler, and the cuddler then accepts that request, you can send a brief, 140-character message saying, for instance, “Meet me at the park,” or “I’ll be the one in the green sweater,” before the app directs you to the person’s location.

When I asked Charlie Williams, Cuddlr’s creator, about the lack of profile information or elaborate messaging features, he said the goal was to differentiate Cuddlr from a typical hookup app.

“When confronted with long and detailed profiles, people tend to spend time reading, writing, and polishing them, instead of getting past that and  meeting with and experiencing someone in person,” he told the Daily Dot via email. “So what we’re hoping is that people look through and meet someone in person, then based on whatever vibe you two have together, you can have a more or less intimate cuddle, or even just pass on it altogether. Because cuddling is so different from dating or hooking up, we thought it needed a different decision-making process too.”

Fair enough, but it didn’t seem like a different decision-making process to me, so much as an easier-to-get-kidnapped-and-sexually-assaulted process.

The second thing I noticed about Cuddlr was how difficult it would be to fulfill Alex’s requirements: Although there were only about 10 or 12 active users on the app, approximately 90 percent of them were male. (To be fair, when I logged on the following Monday, there were far more users and the gender ratio was somewhat more balanced, at about 60 percent men, 40 percent women. This jives with what Williams told me when I asked about Cuddlr’s gender ratio: “We’re reasonably balanced with a slight cast toward more male names signed up so far.”)

Undeterred, I kept sending cuddle requests to the app’s female users, all of whom looked relatively fresh-faced and well-scrubbed in a dating profile sort of way. Yet none of them responded to my requests. (My name is gender-neutral, but my profile photo on Facebook clearly depicts me as a woman.) This seemed odd to me: If Cuddlr was ostensibly asexual, wouldn’t a cuddler be less discriminatory about the gender of the cuddlee? Perhaps there were other, less platonic factors at play here.

This suspicion was cemented the following weekend, during which I received a little more than a dozen requests from male Cuddlrs, often repeatedly:

Of course, because Cuddlr has no filter to speak of, I couldn’t stop the requests from coming in, or message them that I was only interested in women. Even if I wanted to accept their requests and vet them beforehand, I couldn’t: Because the app had just launched last week, none of them had any Cuddlr ratings, which is the only way to assess whether or not a Cuddlr is, in fact, a creeper. (After a cuddle, you’re supposed to give a Cuddlr a thumbs-up if it was successful, and thumbs-down if it was creepy or inappropriate.) But even if I did have those tools at my disposal, my experience on online dating sites like Tinder and OKCupid have taught me that it probably wouldn’t have made a difference: The requests would keep coming in anyway.

Maybe the onslaught of requests from male Cuddlrs was because my profile photo made me look exceptionally soft and snuggly, but I doubt it. I suspect I kept getting so many Cuddlr requests from men—and none at all from women—because the men on Cuddlr wanted to take any opportunity to play big spoon and press themselves against a welcoming lady. That’s not to say that all the men on Cuddlr shared this motivation—I’m sure many were using the app in exactly the spirit it was intended—but I can say that I got enough requests that I decided to delete the app entirely.

In theory, Cuddlr is trying to do something completely different from most other dating apps: It’s using a digital platform to get people to think of physical intimacy in an entirely new way. To a certain extent, I think this is an interesting and valuable concept. But in practice, Cuddlr is no different from other dating apps—in fact, given its lack of filters and its location-based settings, it might even be more dangerous.

One day, it’s possible that we might live in a world where people can respect and connect with each other the way that Cuddlr’s creators and the Free Hugs sandwich board guy want us to. But it’s safe to say that we don’t live in that world quite yet, and despite its lofty utopian aims, it’s doubtful that an app like Cuddlr is bringing us any closer.