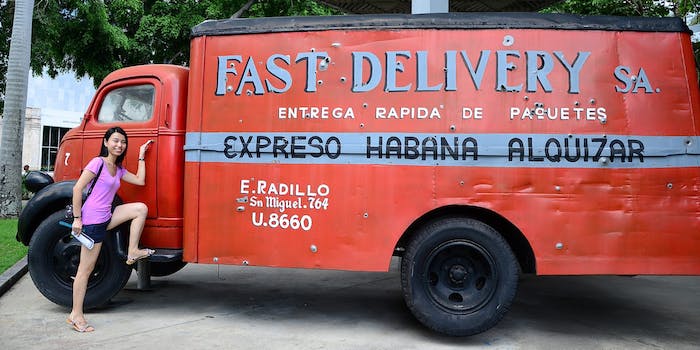 Think your Internet connection is slow? Try surfing the Web in Cuba, where the hottest way to get access to a week of online content is… physical home delivery.

Enter El Paquete Semanal, or The Weekly Packet, which is reportedly growing like mad.

Unidentified Paquete editors pull together the week’s best online content, including music, movies, TV shows, magazines, and a classifieds section, reports the BBC. Using an unofficial street-level distribution system, someone then brings the edition to your door and copies it onto your computer or mobile device. The delivery service charges between $1 and $15, depending on how much of it you select and when you have it delivered.

Despite the loosening of some aspects of Internet access in Cuba, such as the first free Wi-Fi connections and access at the U.S. embassy, it is still very difficult for most Cubans to get online. Internet connectivity is currently as low as 5 percent across the island nation.

“Every Monday, a young man comes here to my house with a portable hard drive and copies the Paquete to my computer.”

Desktop computers, laptops, tablets, and even smartphones have been available to Cubans for years. But the inability to connect with the Internet has created a frustration which the Paquete has helped to sate.

“Every Monday, a young man comes here to my house with a portable hard drive and copies the Paquete to my computer,” Cuban journalist Ana Lauren told the BBC. “I can copy whatever I want. If I don’t want to copy music this week I don’t have to. I only copy the things and shows that I want to use this week.”

The Paquete is so popular it has become a platform for media producers and advertisers. There are publications whose readers access them overwhelmingly as part of the Paquete. There are advertising agencies who sell their clients space on the weekly packet.

Given the possibility of a faster, cheaper Internet in Cuba, a possibility which has inspired Google to propose a growth plan to the Cuban government, the future of El Paquete Semanal is uncertain at best.

The connection between the Cuban government, the Cuban Internet, and American high-tech companies is likely to grow, given the country’s removal from the U.S. list of state sponsors of terror, the reopening of embassies in both countries and, as of the end of last month, the introduction in the U.S. Congress of a bill to end the trade embargo.

“Changes that the Cuban government has recently instituted—introducing a limited number of free Wi-Fi and paid public access points—should be viewed for what they really are: cosmetic tweaks meant to present the government in a more positive light,” Sanja Kelly, director of Freedom House’s Freedom of the Net project, told the Daily Dot. “The reality is that home Internet connections in Cuba are still prohibited by law.”

The Cuban government is clearly interested in the economic potential associated with widespread Internet access, but they are terrified of political change that the Internet might enable, said Kelly.

Anyone under the misapprehension that Cuba has transformed overnight into a land of freedom and opportunity need look back only to last Sunday, when security forces arrested 90 dissidents for participating in a peaceful march.

“Over the next few years, the Cuban government will likely combine expanded connectivity with greater internet controls,” said Kelly. “As they improve and build infrastructure, they will invest heavily into technologies that enable them to filter politically sensitive content and conduct widespread surveillance.”

The Internet in Cuba is, according to Kelly, more likely to look like that of China than that of the U.S.

Photo via kudumomo/Flickr (CC BY 2.0)