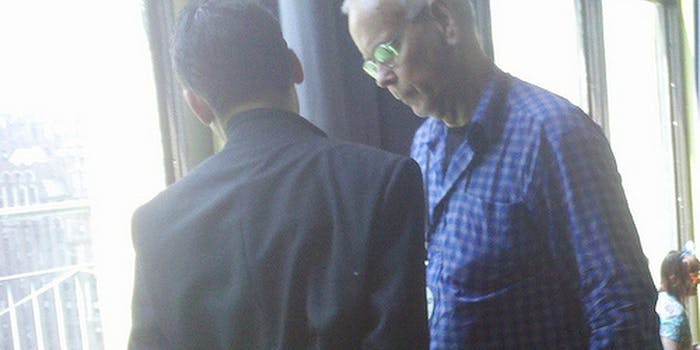 Cryptome founder John Young on documents, disclosures, and the competition

As for the other site he helped found: "WikiLeaks is unspeakably over-discussed."

And that is how we knew it was going to be a good interview.

The Daily Dot spoke via email with John Young, architect and founder of Cryptome.org, generally acknowledged to be the longest-running document disclosure site online. It began back in 1996, when its design could arguably have been considered avant-garde, and the site hasn’t concerned itself with cosmetics since. It’s a bare-bones site, consisting of a simple list of links, titles, and the date they were uploaded to the site, scrolling back into history. Currently, the front page of Cryptome features information about NSA facilities, electrical grid vulnerabilities, the General Accounting Office’s report on cybersecurity, WikiLeaks’ financial straits, the FBI IT agreement form, and the Stratfor class-action settlement, among many other documents.

Young is a prickly personality who has dealt with (and won against) the FBI, Microsoft, and many others in the effort to keep his site up and publishing for the last 14 years. In contrast to WikiLeaks, of which he was a cofounder and which he now views with some contempt, he does not redact or edit the documents he publishes in any way. He recently offered to post an entire block of files that WikiLeaks controls, unredacted, if someone would send it to him.

He warned us on Twitter the interview would not be easy, and he was not wrong, but it was very interesting. In the (misquoted) words of Bette Davis, “Fasten your seatbelts; it’s going to be a bumpy ride.”

John Young: Not that I have experienced, on the contrary there is considerable sharing of material and support when needed. As was WikiLeaks before Collateral Murder. That appears to be when the group was joined by (or taken over by) highly professional PR people posing as journalists, the same ones still representing the group and not a few later also listed on WL as reliable press.

Risks are what leads to cooperation. Those who do not share the risk are cowardly bloodsuckers. Rhetorical risk is not risk, and that covers publishers, editors and most but not all journalists, essayists, opinionators, scholars, fans, financial contributors in all their guises.

DD: Who owns leaks, once they’re given to a site? What do you think a leak admin’s responsibilities are?

JY: Leaks are Faustian, they are always corrupt, biased, self-serving of the source, untrustworthy. We prefer the term “disclosures,” or more simply, providing documents for study, free of editorialization, spin, doctoring, redacting, sanitizing, protecting the innocent and such vainglorious rot, and which minimizes the excessive dramatization of “leaks.”

“Leaks” are owned by the source that fabricated them, and all are fabricated, all are hokum for garnering press attention. Wasn’t the metaphor invented by the press to rouge its sickly carcass?

“Leak” admin’s role is to exaggerate the importance of leaks by a slew of promotional gimmicks: bombshells, slow dribble, cultivate role-playing by the leaker and mouthpieces, press releases, danger mongering, garner or bestow awards for courage, and, most crucially, panhandle for money to sustain the Ponzi.

DD: Archivists have a philosophical split over the issue of responsibility: is their debt owed to the documents, or to the users? What do you think?

JY: To the documents, forged or genuine—free of the archivist’s vainglory and misleading authentication which is likely impossible. Document control is a great and ancient conceit of librarians, clerks, spies, scholars, promoters, you and me because we innately know we fabricate unsubstantiatable fictions, narratives, stories, verisimilitudes, fables, which need the authoritative couture of forged citations, plagaries, footnotes, quotes, email, recordings, verifiably deceptive as history to market the mess.

DD: What is your opinion of Open Leaks, the WikiLeaks “mirror” or competitor announced by Daniel Domscheit-Berg in September of 2010 (it has never materialized, and the Wikipedia page was deleted some weeks ago)? Was it ever going to happen, was it just vaporware, or has something we haven’t heard about happened in the meantime to prevent it from launching?

JY: OpenLeaks is an admirable example of packaging hot air based on the simple-minded notion that it is a WikiLeaks without its faults. A spin-off marketing ploy deadened from birth by the term “Leaks.” “Open” would have been fresh air into the stale secrecy atmosphere of anything pathetically leaks.

DD: What do you think of WikiLeaks?

DD: What do you know about Par:AnoIA, the Anonymous-created leak site? Do you think it fulfills a need, or is it just duplication of what already exists in terms of distribution of info?

JY: Par:AnoIA is humorous, so that is a good counter to the ponderousness and messianic seriousness of the Wiki et al Leaks mania.

DD: How do you handle crap submissions of the crazy cat lady variety?

JY: All submissions are crap or worse. None should be glorified but without mark-up there would be no such thing as “leaks,” only a bit of information vapor oozing through the floorboards to oxygenate the stifling choking “news.”

DD: When was Cryptome founded? How many people are involved? You’ve had trouble with the Feds in the past; how is it that those days seem to be over? How do you protect yourself? How much have you had to spend on lawyers?

JY: Trade secret, there’s only one. Leak yourself instead of expecting others to do so. Fuck off, it is totally uninteresting. Read it on Cryptome, pass out from boredom.

As you might imagine, the latter is unlikely. For the intrepid, that link is Cryptome.