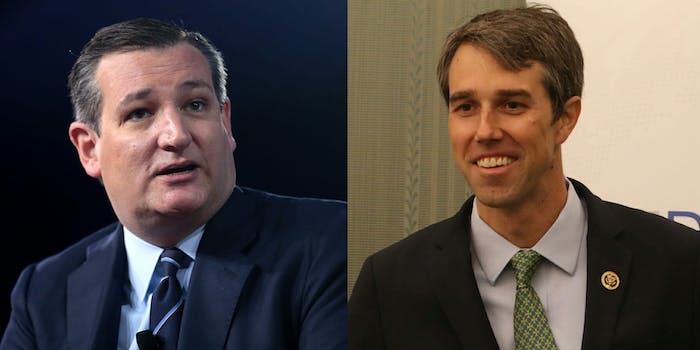 Poll: Race between Ted Cruz and Beto O’Rouke ‘too close to call’

A recent poll shows Cruz with a small lead over O'Rourke.

Sen. Ted Cruz (R-Texas) may be looking at a tight race against Democratic challenger Beto O’Rourke later this year, a new poll suggests.

Cruz holds a small lead over O’Rourke–47 percent to 44 percent–in a poll by Quinnipiac University released on Wednesday, which the polling firm says makes the race “too close to call.”

“Democrats have had a target on Sen. Ted Cruz’s back, and they may be hitting the mark. Once expected to ‘cruise’ to reelection, the incumbent is in a tight race with Democratic U.S. Rep. Beto O’Rourke,” Peter A. Brown, assistant director of the Quinnipiac Poll, said in a statement.

Along party lines, the split among voters is what you’d expect: 87 percent of Democrats support O’Rourke and 88 percent of Republicans favor the incumbent senator. However, O’Rourke has a commanding lead among independent voters, according to the poll, leading Cruz 51 percent to 37 percent.

While unseating Cruz would be considered an upset, O’Rourke has been raising large amounts of money ahead of the midterm elections, like several other Democrats hoping to take prominent Republican congressional seats.

The incumbent Texas senator seems to have been feeling the heat from his Democratic rival. Last month the Cruz campaign released a jingle that poked fun at O’Rourke going by his nickname, Beto, rather than his given name, Robert. The jingle was criticized because the Republican senator also goes by a nickname.

You can read more about Quinnipiac University’s poll here.