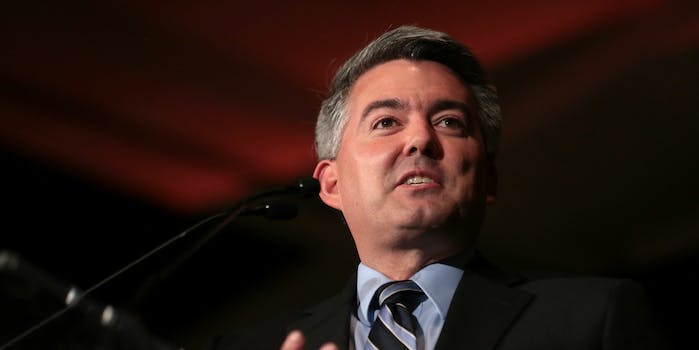 Senator Gardner was a consistent supporter of Brett Kavanaugh.

Senator Cory Gardner (R-Colo.) stated to Fox News on Sunday that his wife had received a text message that included a graphic video of a beheading, and claimed that someone had posted the family’s address and names online.  The senator’s claims came shortly after he voted to confirm Brett Kavanaugh as the newest Supreme Court Justice.

Gardner’s support for Kavanaugh was strong from the start; he announced he would back the judge in July, and later reaffirmed it after this month’s contentious FBI report, intended to formally investigate the accusations of sexual violence against Kavanaugh. Democrats and activists accused the White House and GOP leadership of constraining the report.

Gardner said he also received a letter last month from an anonymous individual that alleged Kavanaugh “shoved” someone up against a wall “very aggressively and sexually” during a 1998 event in front of four witnesses. The claim was later found not to be credible.

“Every victim of abuse, assault, and violence has been through an unspeakable tragedy and we need to do a better job listening to them, ensuring support is available, and fighting to end abuse of any kind,” Gardner said in a statement on Friday. “I hope that the partisan divide we all feel today does not hinder the people that have bravely come forward.”

Kavanaugh, his family, and accuser Christine Blasey Ford have all received similar threats, including one which stated Ford had six months to live.

According to a sworn statement and sources that spoke to Fox News, Cosko was seen at a computer in Sen. Maggie Hassan’s (D-N.H.) office, where he was not authorized to be and was caught logging in with a username and password he was not authorized to use. There is currently no evidence to suggest that Cosko leaked Sen. Gardner’s information or any information beyond those three Republican senators.