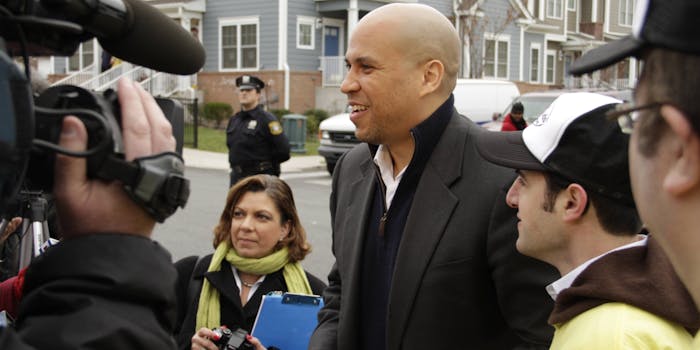 The battle lines are drawn on another Internet policy issue.

In the latest in a series of Internet-policy moves at the start of the 114th Congress, Sen. Cory Booker (D-N.J.) on Thursday will propose a bill to invalidate state laws that ban city-run broadband.

Sen. Booker, a rising Democratic star, is introducing the Community Broadband Act to amend the Communications Act to prohibit those state laws. The move follows a request from President Obama to the FCC to preempt the state prohibitions under its independent regulatory authority. The commission will decide whether to intervene at a Feb. 26 meeting.

In announcing his bill, Sen. Booker slammed the telecommunications industry for its quasi-monopolistic practices and said that a lack of consumer choice prevented many Americans from accessing true high-speed Internet. City-run Internet, he said, often crumbled before it even got off the ground in the face of an “industry that wants to maintain monopolies in many ways.”

Republican critics of FCC preemption have argued that the agency does not have the authority to tell states what they can and cannot prohibit in this arena. In introducing the Community Broadband Act, Sen. Booker is sweeping aside the possibility of procedural objections and forcing Republicans to either support or oppose community broadband on its merits.

Recalling the role of government investment in creating the Internet, Sen. Booker argued that similar investment was necessary to ensure the Internet’s reaches all Americans, especially those who live in areas where commercial providers had no incentive to care about those things themselves.

Municipal broadband isn’t the only Internet policy area where Booker sees eye-to-eye with open Internet activists. The senator has also voiced his strong support for net neutrality, an issue on which FCC action is also expected following their February meeting.

What keeps the internet "free and open" ? This article does an awesome job summing up the issues: http://t.co/0nduNfEa1I – Yas