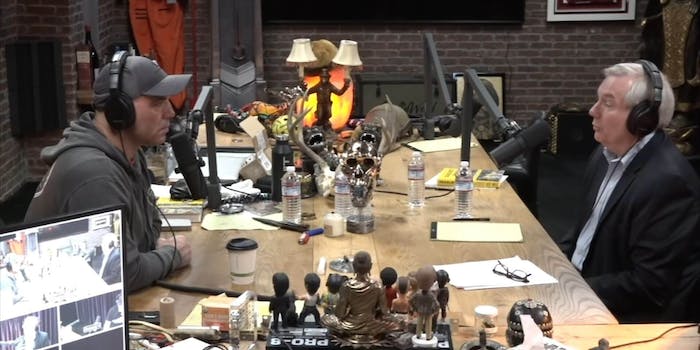 He's been trying to sound the alarm for 15 years.

If you feel the need to panic because of coronavirus—and the damage it has already done and still might do—you might not want to listen to Joe Rogan’s recent podcast. That’s because an infectious disease expert he interviewed on Tuesday had some startling statistics about COVID-19.

According to Michael Osterholm, who referred to himself as a medical detective and said he’s spent his entire career tracking infectious diseases and trying to stop them, said coronavirus could be 10-15 times worse than the worst flu season we see.

In his estimate, coronavirus could infect 98 million people with 48 million hospitalizations and more than 480,000 deaths in the next three to seven months. That, Osterholm said, is a conservative estimate.

“This is not one to take lightly,” he said.

He also read from a report that began circulating in the past few days that said Italian doctors are so overwhelmed and that medical resources in that country are so stressed that they’re basically having to decide who gets treatment and hopefully lives and who doesn’t and probably dies.

Rogan responded throughout the interview with multiple utterings of, “Wow,” and an occasional “Oh boy.”

Near the end of the clip, Rogan said, “Jesus. You’re making me nervous.”

Osterholm’s stark stats are also reflected in a presentation from a webinar hosted by the American Hospital Association last month that was leaked to Business Insider. Dr. James Lawler, a University of Nebraska Medical Center professor, presented his “best guess” about how hard coronavirus could hit the U.S.

The American Hospital Association later said the presentation reflected the views of the speaker and not necessarily the organization.

But Osterholm—the director of the Center for Infectious Disease Research and Policy at the University of Minnesota—has been trying to sound the alarm for 15 years. According to CNN, Osterholm wrote in Foreign Affairs magazine in 2005, “This is a critical point in our history. Time is running out to prepare for the next pandemic. We must act now with decisiveness and purpose.”

His interview on Rogan’s podcast certainly didn’t ease the mind of some of the YouTube commenters who viewed it.

“Maybe getting high and watching this wasn’t a good idea,” wrote one person.

Penned another, “I feel like I’m getting a runny nose and sore throat after watching this.”

And another: “The reason we’re low on toilet paper is that every time someone sneezes 50 people crap themselves.”

Osterholm also gave even more worrisome news. “It’s just beginning,” he said. “This is going to unfold for months to come. That’s what people don’t understand.”