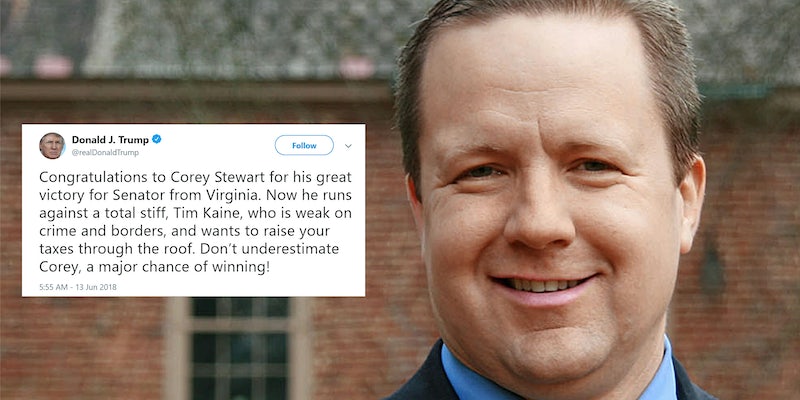 Corey Stewart is a dangerous candidate.

This morning, President Donald Trump endorsed one of the most far-right candidates to win a Republican primary, congratulating Corey Stewart for his win in Virginia.

Congratulations to Corey Stewart for his great victory for Senator from Virginia. Now he runs against a total stiff, Tim Kaine, who is weak on crime and borders, and wants to raise your taxes through the roof. Don’t underestimate Corey, a major chance of winning!

Over the past year, much has been made about Trump’s tacit support of white nationalists within the Republican party, and his praise of Stewart makes it fairly explicit.

The president’s endorsing a candidate who has come out in favor of Confederate statues, called an avowed Nazi one of his “personal heroes,” and has supported Trump’s stance on calling immigrants “animals” and jailing his political opponents.

Stewart made most of those (mis?)steps in a failed bid for the Republican nomination for governor. But he’s returned to the scene and shown that Virginia—which elected a Democrat for governor—is still staunchly Trump country.

At his victory rally, he echoed Trump’s words on some immigrants, calling them “animals,” and listened as the crowd went in on a “Lock Her Up” chant,  according to the Washington Post. Stewart will be going up against Hillary Clinton’s 2016 running mate, Tim Kaine in November.

While working in Prince William County as county supervisor in 2013, Stewart first made a name for himself by championing anti-immigrant enforcement laws that he said compared favorably with those in Arizona, which were ruled unconstitutional.

“We need to bring the rule of law to all of Virginia,” Stewart said to the Washington Post. “As long as the federal government shows no interest in securing the border and no interest in internal enforcement to promote self-deportation, then states and localities will have to pick up the slack.”

Stewart’s more recent history dabbles with the extremist fringe of the Republican party. He praised Paul Nehlen, an anti-Semitic who ran against Rep. Paul Ryan (R-Wisc.) and was banned from Twitter for using racist language. Stewart once called Nehlen one of his “personal heroes,” a statement he only tepidly renounced.

Stewart also has a history with Charlottesville. He had been photographed with Unite the Right rally organizer Jason Kessler, and afterward, when Republicans condemned the Nazis running rampant at the event, Stewart said there was nothing to apologize for.

“All the weak Republicans, they couldn’t apologize fast enough,” Stewart told the Washington Post. “They played right into the hands of the left wing. Those [Nazi] people have nothing to do with the Republican Party. There was no reason to apologize.”

In that same interview with the Weekly Standard, Stewart claimed to not know what the alt-right is, the fringe section of white nationalists in the conservative movement, but he’s been known to quote-tweet its members.

McAuliffe's and @Comey too.

These people led the FBI into this mess and now want zero accountability. https://t.co/hVHuzPiB6y

He has also been interviewed by Jack Posobiec, a far-right celebrity and staunch Pizzagate supporter.

On set with @JackPosobiec at @OANN studios in DC talking about the #VASen primary election today in Virginia.

If you haven't already, go vote!

Stewart also danced with the birther movement, although claims his tweets about Obama were meant to highlight hypocrisy and were not an actual accusation about Obama’s nationality.

The Virginia senate election is on Nov. 6.