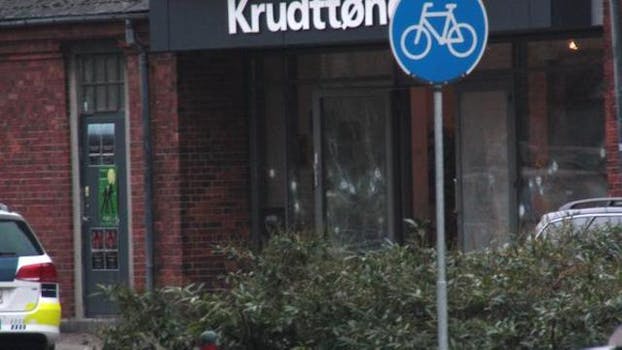 Police have released an image of the suspect.

On Saturday, a gunman opened fire at a free speech event at a Copenhagen cafe. One person is confirmed dead and three police officers have been injured.

According to the BBC, roughly 40 shots were fired at the cafe, which was hosting a debate about blasphemy, free speech, and art. Swedish cartoonist Lars Vilks, who has in the past drawn controversial images of Muhammad and faced subsequent threats, was at the event but not injured. Helle Merete Brix, founder of the Lars Vilks Committee and one the event’s organizers, was also in attendance but not injured.

Twitter lit up this morning with tweets from the scene.

I was at the point of ny speech when i was saying that often it is an illusion that we have freedom of speech in Europe.then we heard shots

French ambassador François Zimeray was also at the event, and tweeted that he too was uninjured.

Still alive in the room

It was originally reported that two gunmen were involved, but Danish police now believe there was only one shooter, and have released a description and image of the person they believe to be the suspect. The Danish prime minister categorized the shooting a terrorist attack. The shooting comes just one month after an attack on the offices of French satirical magazine Charlie Hebdo.

Update 11:32pm ET, Feb. 14: A second shooting in Copenhagen has claimed the lives of two people and injured five police officers, the Associated Press reports. Law enforcement authorities have yet to determine whether the second shooting, which occurred outside a synagogue, had connections to the first. The dual attacks have reportedly left residents and tourists in the Danish capital on edge and fearing for their safety. In each incident, the shooter walked away and remains at large.

Update 3:18pm CT, Feb. 15: Early Sunday morning, Danish police killed the man alleged to be responsible for the two Copenhagen shootings. The Associated Press reports that the man, whose name has not been released, was from Copenhagen. He was also allegedly known to Danish police and had a criminal record. Police are still investigating whether or not the suspect had help carrying out the attacks.