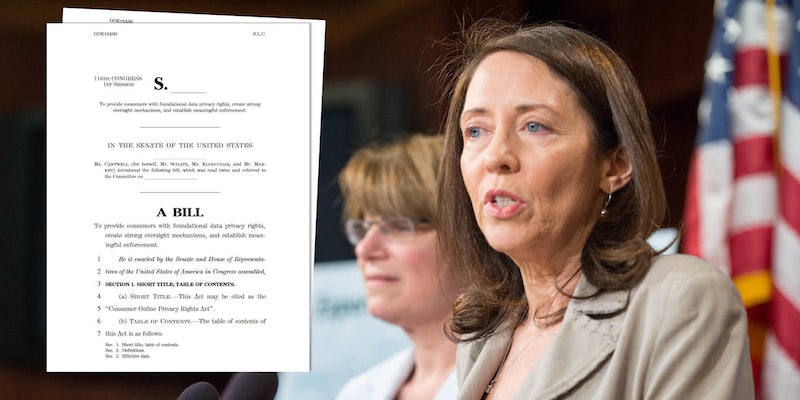 The bill aims to give consumers more control over the data collected by tech companies.

Several Democratic senators on Tuesday unveiled an online privacy bill that would give internet users more control over how their data is handled by tech companies.

The bill would force tech companies like Facebook and Google to explain what they are doing with data collected on its users and give those users the ability to see—and delete—personal information collected by the companies.

It would also allow users to opt-out of the data being transferred from the companies to a third party and would restrict companies from processing the data based on someone’s “actual or perceived race, color, ethnicity, religion, national origin, sex, gender, gender identity, sexual orientation, familial status, biometric information, lawful source of income, or disability.”

COPRA proposes having companies have to certify to the Federal Trade Commission (FTC) that they are compliant with its rules each year and would create a new bureau within the FTC to handle violations of the new rules.

“You have to start saying these aspects of your life belong to you, and you have the right to decide how they’re used,” Cantwell told the Washington Post.

The Senate Commerce Committee, which Cantwell, Schatz, Klobuchar, and Markey all sit on, is scheduled to hold a hearing on data privacy next week.

The bill’s introduction in the Senate comes on the heels of a similar online privacy bill being introduced by Rep. Anna Eshoo (D-Calif.) and Rep. Zoe Lofgren (D-Calif.) in the House earlier this month.

Their bill, the “Online Privacy Act of 2019” proposes creating a new federal agency to impose fines on violations of its rules.