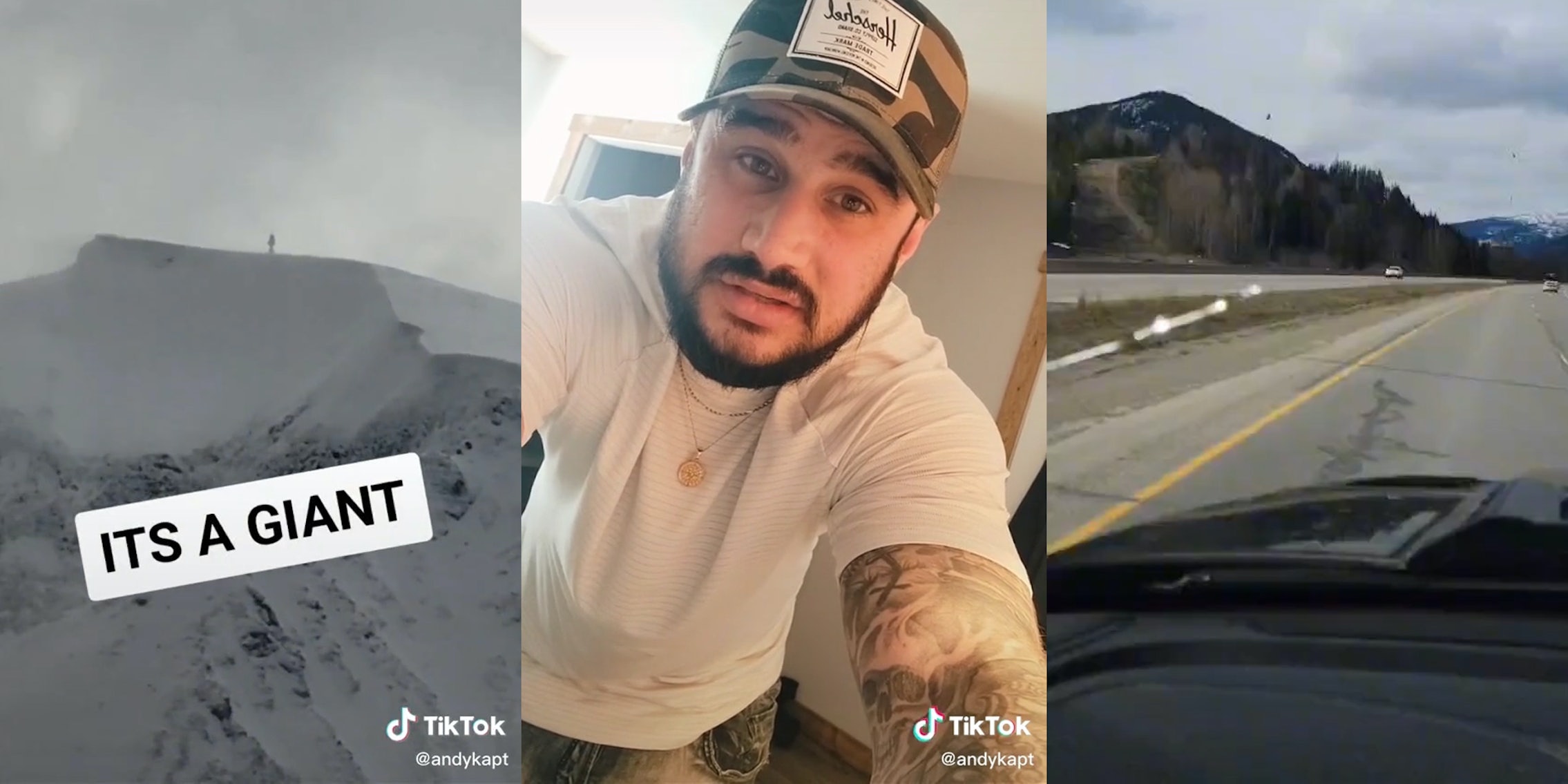 It's a bizarre rumor that persists.

A rumor spreading rapidly online claims that the Central Intelligence Agency (CIA) murdered a man over a video that supposedly showed a giant.

Last spring, a man posted a TikTok of a “giant” atop a mountain in Canada. The footage is grainy and the figure is impossible to discern at the distance from which it was captured. Yet the TikTok quickly went viral, racking up 2 million views within days. As of this writing, it’s been viewed 8 million times.

“It’s a person,” the TikToker, Andrew Dawson (@andykapt) said in the video captioned “it’s a giant.” The supposed giant is a dark silhouette at the top of a snow-covered mountain in the distance. The other person in the vehicle wasn’t buying it. “No it’s not,” they said.

Dawson followed the video up with posts attempting to “investigate” the supposed creature. In subsequent posts, he claimed he’d been stopped by a CIA agent and that someone was following him.

He also said that the giant had disappeared and wondered if it was a UFO. “Did the thing on the mountain go home,” he wrote.

Weeks later, Dawson published a TikTok admitting that it was all fake.

“Sorry to disappoint you guys but all of the videos that I posted were scripted, they’re just fake, strictly for entertainment,” he said.

Days later, he posted another TikTok insisting the previous videos about the giant and the CIA were real. The onscreen caption read “I am scared.” In it, Dawson said, “You might not see me post ever again. My videos, they weren’t fake.”

He posted one more time then went silent.

Questions about the cause of his death and claims that the CIA was involved floated around the internet for months.

In October, a podcast dedicated to legends like the Loch Ness Monster and Sasquatch wrote a blog about Dawson’s death. They wrote that a week before he passed away, Dawson confirmed via Instagram direct message that his videos about the giant and the CIA were “all fake.” Just as he had done on TikTok, Dawson reportedly later muddied the waters in messages where he reportedly wrote, “I can’t say anything about it…. It didn’t happen.”

More recently, conspiracy theories about Dawson’s video of the “giant” and the CIA being involved in his death have gained significant traction. The portion of the web that delves into such matters is churning out massive amounts of content about it.

Many of the TikToks that include the hashtags reiterate the conspiracy theory that Dawson was killed for filming footage of a giant.

Some of these TikToks have millions of views.

According to Know Your Meme, internet sleuths have gone so far as to visit the mountain looking for evidence to back up or debunk Dawson’s claims.

Over the weekend, an influencer with 100,000 followers tweeted Dawson’s videos and wrote, “The government definitely hiding something from us man ….. they killed him because HE SPOTTED A FUCKING GIANT.”

Tweets claiming that the government killed Dawson have racked up tens of thousands of interactions.

Dawson’s death doesn’t appear to have anything to do with giants, UFOs, or the CIA.

Days after he posted the initial video, Dawson wrote about it on his personal Facebook page. He was clearly thrilled to go viral.

One of his friends said that it was actually just a video of a cross. “God just goes to show what blows up,” they wrote, prompting multiple laughing reactions. Dawson replied, “It’s a giant!!!” to which his friend wrote, “It’s a giant cross.”

While the CIA conducts operations on foreign soil, it is rather implausible it would clumsily go after a Canadian for posting grainy footage of a “giant,” particularly considering the long history of others posting footage and videos that supposedly show mythological creatures like Bigfoot and extraterrestrials.

Many people have debunked Dawson’s video and the rumors about his death.

“y’all refuse to believe in bisexual men but choosing to believe in someone being killed for ‘exposing’” giants? make it make sense,” one person tweeted on Monday.

TikToker @the.hoax posted footage that purportedly came from the same mountaintop. That footage shows perfectly ordinary infrastructure and no evidence of any giant.

Still, rumors and questions about the CIA, Dawson, and giants persist.

“So the real question is: was there really a giant out there, or was it something else? Or was all this just a really good hoax?” a blog that delves into strange events wrote last week.