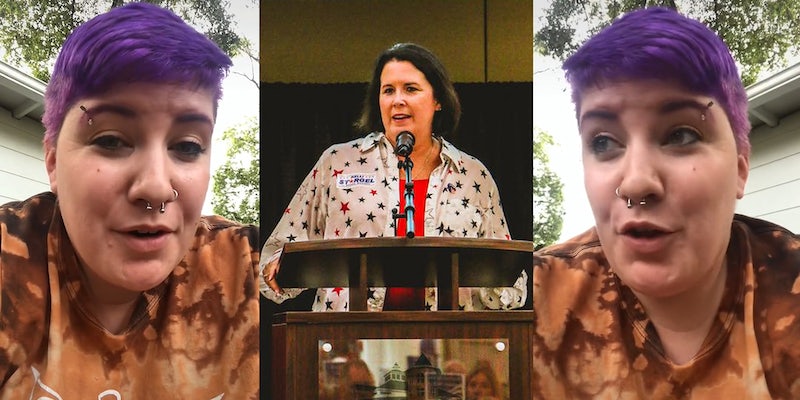 'Is this really somebody you want up in D.C. passing laws for you and your children?'

Family can be a huge asset for political candidates. They can also be a major liability. One lawmaker is experiencing a pretty severe version of the latter. Florida state Sen. Kelli Stargel’s (R) daughter is using TikTok to oppose her run for Congress.

Hannah Stargel (@tattooed_stargel) began the series on May 22 with a TikTok captioned, “Do not vote for the worst Mom ever.”

In it, she attacked Sen. Stargel for voting for Florida’s 15-week abortion ban and sponsoring legislation prohibiting transgender females from participating in women’s sports. This is the second time one of the elder Stargel’s daughters has publicly denounced their mother’s trans-exclusionary sports bill.

“Is this really somebody you want up in D.C. passing laws for you and your children, telling you what to do with your body?” she said in the TikTok, first reported on by Florida Politics. She told the outlet that her mother announcing a run for Florida’s 15th congressional district inspired her to speak out.

Hannah Stargel blasted both her parents for a childhood she describes as traumatizing and neglectful, including sending her to a facility for troubled teens when she was 15. Her father, a former legislator, is an appellate court judge.

Kelli Stargel didn’t respond to a request for comment submitted via her campaign website Tuesday morning. Florida’s congressional primary is in August.

In a statement to Florida Politics, she previously said of her daughter’s TikToks, “I love my daughter with all of my heart.”

Hannah’s TikToks mostly focus on her mother, from whom she has reportedly been estranged since the trans-exclusionary sports bill.

She’s described her mother as a “horrible person” who put politics before everything else, including her children.

“This is the same woman who wouldn’t feed me if I didn’t go to church on Sunday,” she said.

Hannah has continued blasting her mother in TikToks that have cumulatively been viewed nearly 250,000 times.

She called her mother’s candidacy for Congress “a shock” and claimed that she’d promised the family for many years that she would leave politics.

“I had actually just come out to my mom a few months earlier,” Hannah, 28, told Florida Politics. “She was really shocked by it, she brought me home like some rainbow chocolates, like just as a peace offering. Then fast forward three months.”

Hannah, who is bisexual, told Axios that the ban creates a hostile school environment for her boyfriend’s transgender daughter.

In her most recent TikTok, Hannah criticized her parents for shipping her off to a Christian school for troubled teens when she was 15.

She claimed they paid for the tuition with funds from a settlement for a car accident that left her in a wheelchair for months when she was in the eighth grade.

“So they used my money to traumatize me more,” she said.

Comments on Hannah’s TikToks are overwhelmingly supportive. “I went to school with you and I believe you 100%,” wrote one. Another asked if she’d consider working for one of her mother’s competitors.

Hannah has said she’d like to see a Democrat win the seat in Congress her mother is seeking, but it’s unknown whether her political activities will extend beyond TikTok. Hannah didn’t respond to the Daily Dot’s inquiries sent via direct message and in a comment on one of her posts.

On TikTok at least, Hannah has found a voice.

“I felt like I couldn’t sit on the sidelines anymore and watch this happen,” she said on TikTok.