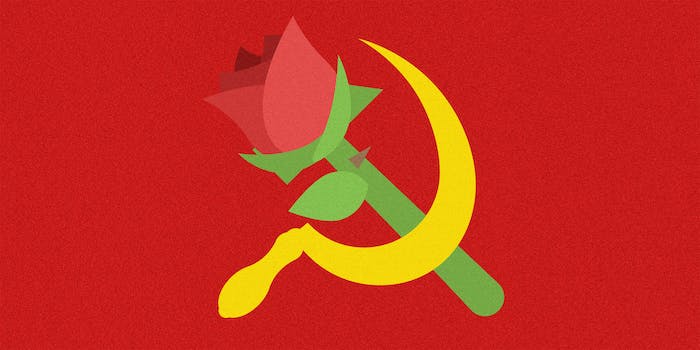 The difference between communism and socialism in simple terms

There are very important differences.

Communism and socialism are not the same thing, even though the two words are often used interchangeably.

It is technically correct to say that communism is one type of socialism, but this obscures the fact the democratic socialists and communists are often at odds when it comes to articulating their vision for the political future. The differences in the goals of socialists and communists can impact how they view short-term strategies and long-term policy goals. Here’s what you need to know about communism vs. socialism in simple terms.

Communism is a social and economic organizing system in which property is communally owned and every person receives wealth according to their needs and ability.

Socialism is an economic theory in which the means of production, distribution, and exchange are owned and controlled by society as a whole.

The key difference between the two theories is that under communism there is no such thing as private property, while under socialism, private property can exist but all industrial and production capacity is managed by a democratically elected government.

Looking at these definitions, you can see that, in a sense, communism is an extreme version of socialism. Marxists (students of Karl Marx) often describe socialism as the “first phase” of communism. Many members of socialists groups, including the Democratic Socialists of America, identify as communists. In a capitalist state like America, you often find democratic socialists, communists, and anarchists working together in left-wing groups because the American left doesn’t have much power.

Under communism, a planned economy administered by the state ensures that the people control the means of production. If you are a socialist, but not a communist, you might believe there are other ways to bolster democratic control of the economy without a totally planned top-down system.

For example, entities like labor unions and worker-owned co-ops can be empowered with control over capital. The government can also enforce limits on how and where private enterprise can operate, ensuring capital is subordinate to the democratic state.

Communism requires a one-party state, as all citizens are workers and all workers have shared class interests. Marxists hope this system would ideally lead to a stateless society, which Marx and Friedrich Engels called the “withering away of the state.”

With a planned economy completely owned by the government, it’s easy to see how the state might have authoritarian tendencies. There is certainly an incentive for party leaders to build up the state rather than allow it to wither. However, sects within a state communist party can function democratically. This year, Cuba rewrote its constitution, and that process did involve debate and voting, though the process certainly had vocal critics.

It is reasonable to look at communism as the one end of a sliding scales of socialism, with social democratic states as we see in Northern Europe on the other side of the scale. How “socialist” a country is in on this scale could be determined by how much of industry is “nationalized” or controlled by the government.

Services like healthcare and education are often nationalized, even in capitalist countries like the U.K. and Canada. In the United States, there is some nationalization in sectors like the postal service and airport security.

Less often, material goods are nationalized. In a more communist country like Cuba, grocery stores and even ice cream shops are run by the government. In recent years, private enterprise has expanded in Cuba. There are now privately owned restaurants; this sector has been denationalized. All of these countries are examples of how no country can really claim to be completely capitalist, socialist, or communist: Our descriptions of these economies in the modern world are about matters of degree.

Even this sliding scale is overly simplistic. Some more communist countries have used the pretext of creating a planned economy to use the police and military to enforce inequality or a dictatorship of the bureaucracy, as opposed to a dictatorship of the proletariat, or rule by the entire working class.

In some one-party states like the USSR, corruption has been rampant. Party members and bureaucrats have been able to game the system and horde wealth for themselves with the support of the police state.

People of certain races, ethnicities, genders, and sexual orientations have been marginalized in communist societies. If socialism is about equal control of the economy by society as a whole, an authoritarian state would be less equal and less socialist, even if there was an entirely planned economy. There is some tension between the goals of eliminating the excesses of capitalism and maintaining democratic freedom, and the challenge socialists and communists face is creating the ideal conditions for true economic, political, and social equality.

One of the reasons that it is so difficult to parse the difference between socialism and communism is that there hasn’t really been a truly communist society or a totally socialist society in the world to date. Both theories function as goals, just as disciples of free-market capitalism have a goal of turning the government over to private industry that can never fully be realized. Experts say that Cuba in the years immediately after the revolution is the closest that the world has ever seen to “full communism,” but even then, the idea of a totally classless egalitarian state has never been reached.

In America, there is an active debate over which countries are “more socialist,” which generally varies depending on how you want people to view socialism. Detractors of socialism hold up economically challenged states like Venezuela as the only models of socialism in the world (while ignoring other issues like sanctions and falling oil prices). Champions of socialism point to more robust socialist economies in South America and Northern Europe.

What do these differences look like practically? It varies, but if you look at modern American socialists movements like the Democratic Socialists of America, you can see differences play out between communists and socialists. Generally speaking, efforts like tenant organizing against landlords appeal to communists as they provide a direct challenge to capital and offer an opportunity to build working class solidarity.

Communists are generally less interested in working towards Medicare for All legislation or engaging in electoral politics, which for them are lukewarm half-measures in view of their long-term goal of a communist state.

Determining which countries are “more socialist” or “more communist” is difficult, as every left-wing state must constantly wrestle with the tension between firmly placing control of the economy in the hands of the people and maintaining a government that respects democratic freedoms and the will of the working class.