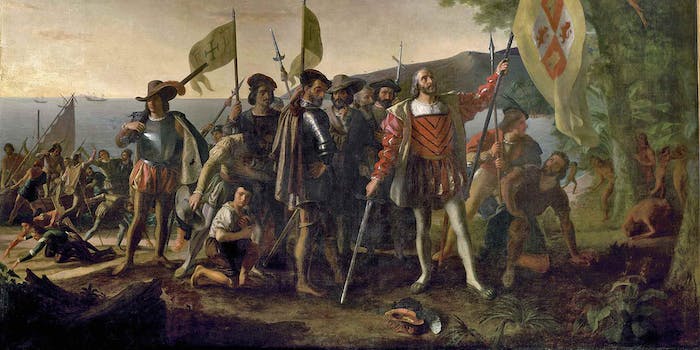 On Monday, Americans across the country celebrate Columbus Day by remembering it exists, frantically trying to figure out if they have to go to work, and then being disappointed when they do.

Literally no one uses Columbus Day for its intended purpose of remembering that Christopher Columbus “discovered” America. Not even the world’s greatest mattress sale could stop Columbus Day from being the worst federal holiday in America.

It’s become pretty cliché at this point to note this—because it’s been done to great effect by everyone from famous historians like Howard Zinn and Eduardo Galeano to snarky digital natives like Gawker and The Oatmeal—but Christopher Columbus was a terrible human being.

After sailing to the new world, Columbus didn’t really seem to care very much about establishing trade routes or interacting with foreign cultures. Instead, he saw some of the natives wearing gold jewelry and made it his life’s mission to kill and enslave as many of them as possible to steal as much of it as possible. On his return trips to the Americas, Columbus forced the natives to continually bring him gold. When someone brought him gold, he gave the person a little pendant to wear around his or her neck, which exempted that person from needing to bring him more gold—at least for a little while. The freedom granted by that pendant would eventually expire and, if a native didn’t bring Columbus more gold, he’d cut off a hand and make the native wore it around his or her neck.

Columbus also hunted natives for sport. Totally a great person who should be held up on the same level as George Washington or Martin Luther King, Jr.

The first human beings to “discover” America were the nomadic tribes who crossed over the land bridge in the Bering Strait from Asia into what is present day Alaska and whose ancestors then settled the continent. But even if you want to be all Eurocentric about it and continue America’s long and proud tradition of discounting the accomplishments of Native Americans, it’s still clear that other white people had “discovered” America hundreds of years before Columbus.

Approximately 500 years before Columbus stumbled onto the New Word, Viking explorer Leif Erickson was blown massively off course while sailing from Norway to Greenland and landed in the place he called “Vinland” due to the presence of naturally growing grape vines. Erickson’s crew supposedly made landfall on what is present-day northeastern Canada. He built a small settlement in present day Newfoundland, evidence of which was eventually unearthed by a pair of Norwegian archeologists in the 1960s.

Christopher Columbus didn’t actually prove the Earth was round

At the time when Columbus sailed the ocean blue, very few people actually thought it was possible to fall off the edge of the Earth.

All the way back in 240 B.C., Greek astronomer Eratosthenes proved that the Earth was round using science, like a boss. He knew that precisely at noon on the summer solstice, the sun was directly overhead in the Southern Egyptian city of Syene and sundials there cast no shadow. However, to the north in Alexandria, there was no such effect—meaning the Earth had to be curved if the sun’s rays were coming in at a flat, consistent angle. By measuring the shadow cast in Alexandria, as well as the distance between the two cities, Eratosthenes also calculated the circumference of the planet. Since Eratosthenes didn’t know that the Earth is shaped like a slightly squashed oval and not a perfect sphere, his measurements were slightly off. Even so, it’s a more impressive feat than simply sailing west and finding a bunch of natives to hunt for sport.

Even the origin of Columbus Day is horribly depressing

Starting in the late 1800s, a wave of Italian immigrants started coming to America. Instead of welcoming them with open arms, much of the country reacted with revulsion—inventing a litany of derogatory stereotypes (like “swarthy”) and even forming lynch mobs to kill Italians. In 1891, one of the largest mass lynchings in American history took place in New Orleans after nine Italians were acquitted of murdering the city’s police chief. An angry mob decided to drag them from their jail cells, along with a pair of other Italians who were being held on unrelated charges, and lynched them all.

In the early 1900s, leaders in the Italian-American community, most notably the Roman Catholic fraternal organization the Knights of Columbus, pushed to get the government to honor Columbus Day as a way to convince Americans to stop being so racist toward Italians.

No one actually celebrates Columbus Day

What if the United States government thew a federal holiday and nobody went? That would basically be Columbus Day.

According to an analysis by Vox, only 15 percent of all private sector workers take the day off and the holiday is only recognized by 22 states. The result is that, in nearly half the states in the country, the only real effect is that parents have to figure out child care solutions because their kids have the day off while they do not. The net result isn’t a day of rest and relaxation. Rather, Columbus Day ends up creating more work than it alleviates.

In his own post from last year excoriating Columbus’s legacy, The Oatmeal creator Matthew Inman proposed a different hero from that era: Bartolome de las Casas. De las Casas was a 16th Century Spanish writer, Dominican friar, and activist for the cause of Native American rights. One of the first European explorers to ever come to the Americas, de las Casas tried and failed to create a model state practicing a less exploitative form of colonialism in Venezuela. Afterward, he became a monk and spent the rest of his life decrying slavery and arguing vigorously in favor of universal human rights for Native Americans. He was appointed to be the first “Protector of the Indians” by the Spanish court and at no point did he cut off anyone’s hand for not bringing him enough gold.

Instead of celebrating a greedy, barbaric sailor who “discovered” a bunch of things other Europeans had found generations earlier, the U.S. should put the holiday to much better use.

Americans already have the least vacation time of any rich, post-industrial economy. In fact, about one-quarter of American workers don’t get any paid vacation time at all. Unless Congress suddenly decides to pass legislation mandating more vacation time (SPOILER ALERT: it won’t), we should probably use what little vacation we have for more productive ends.

For example, maybe the government should close schools and give everyone the day off of work on the same day that we citizens are expected to do our single most important civic duty. Voter turnout rates in the United States are among the lowest of all Western democracies. A Census Bureau survey conducted after the 2008 elections found that about one-quarter of people who registered to vote but didn’t actually cast a ballot said they didn’t vote because they were either too busy or forgot. If Election Day were a national holiday and people woke up thinking to themselves, “I don’t have to go to work today because it’s Election Day,” that number would likely plummet dramatically.

There have been calls to make Election Day a federal holiday for generations, but the movement has never gained much traction because making it easier for everyone to vote would undoubtedly have a partisan effect. Voting rates for minorities and people with lower levels of income and education tend to be lower than those for rich white people. Making the former categories of people more likely to vote would undoubtedly produce some kind of swing toward one political party—bet you can guess which one. As a result, millions of people around the country are unable to exercise their most fundamental right because they’re stuck in the office on the first Tuesday in November.

Or just do Indigenous Peoples Day

Several cities across the country, such as Seattle, Minneapolis, Boulder, and Phoenix, have turned Columbus Day into Indigenous Peoples Day, which honors the history and culture of Native Americans. This is, unquestionably, a better use of a federal holiday. Pretty much anything would be better, really.