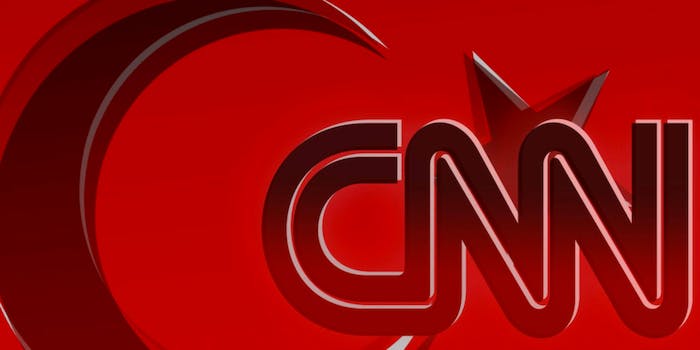 CNN continued to broadcast on Facebook Live and has since retaken the airwaves.

Soldiers supporting a military coup in Turkey burst into the local CNN station early Saturday morning at the Dogan Media Center in Istanbul, but soon after, CNN Turkey staffers had retaken the studio and began broadcasting again.

Reporters inside the building took to Facebook Live, much like the rest of the country, as Turkish citizens appeared to storm the lower floor of the building, chanting loudly for the soldiers to “get out” of the building.

CNN Turk Director Erdogan Aktas was reportedly heard telling his staff to shut down their computers and leave the floor where live coverage of the attempted coup was being filmed. The broadcast continued, however, displaying an empty seat at the anchor’s desk.

Earlier, Turkish President Recep Tayyip Erdoğan had appeared on CNN Turk via FaceTime. He encouraged viewers to protest the coup, telling them to “go to the streets” and “give them their answer.”

Added Erdoğan: “Those who are responsible, we will give them the necessary punishment.”

A military helicopter lands on the backyard of the Dogan Media Center in Istanbul, they are storming in the CNNTurk studios right now

Head of @cnnturk @aktaserdogan says I will be the last to leave, turn off your computers, don't turn back pic.twitter.com/OPz0UhHb0d

Journalists at major Turkish newspaper Hurriyet Daily News, also housed in the Dogan Media Center, tweeted images of soldiers who forced their way into the building and detained them.

A group of putschist soldiers are now raiding our newspaper. They are coming to my floor pic.twitter.com/1OPlb74tqe

I've asked a soldier if he is aware he violates the Constitution. He kept silence. "Leave your gun & go home" I said. He smiled.

CNN Turk continued to broadcast on Facebook after the soldiers entered the building.

But soon after, Erdogan Aktas reappeared on the airwaves.

Staff @cnnturk explaining what happened. Police tried to stop soldiers while a crowd gathered outside.

Weapons have been taken from the soldiers who stormed the @cnnturk building. Police formed a buffer between protestors and soldiers

And people were most definitely watching.

It is not yet known how many have been killed or injured in the surprise military coup which began late Friday night local time. Explosions have been seen hitting the Turkish parliament in Ankara where tanks had been reported. Prior to going off air, CNN Turk reported some police and parliament staff had been wounded.

Crowds of people have reportedly gathered in the streets surrounding Taksim Square where police and military have also reportedly exchanged fire. A series of large explosions has also been reported near the square.