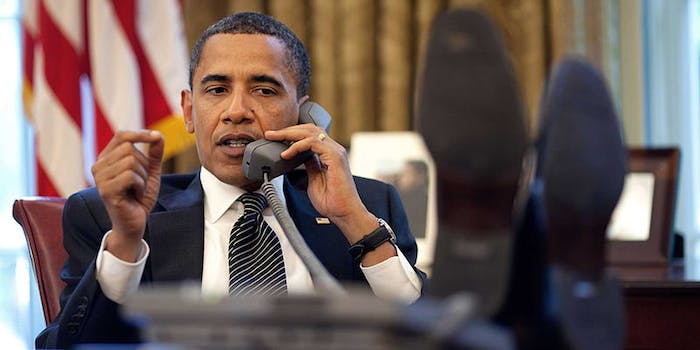 CNN mistakes ‘Obama’ for ‘Osama’ in the worst possible way

For people who write a lot, typos are just another hazard of the job. Double-checking everything before releasing it into the wild is always a good idea, but some things are inevitably going to slip through because, well, nobody’s perfect.

Even so, there are some typos that are especially important to catch. When writing about a “public health crisis” a simple slip of the finger could instantly turn it into a “pubic health crisis,” which, while also not desirable, is something fairly different.

And then there’s the fact that the last name of the president of the United States and first name of the terrorist mastermind behind the 9/11 attacks are only separated by a single letter. It’s an issue that CNN ran into during a Friday night segment about Rob O’Neill, the former Navy SEAL who claims to have killed Al Qaeda leader Osama bin Laden.

While President Obama is pretty much always under attack from his conservative critics, he’s usually safe when it comes to Navy SEALs.

The segment was in reference to the controversy that’s swirled around O’Neill since he decided to go pubic with his identity earlier this week. O’Neill told his story to journalist Phil Bronstein for a story in Esquire last year, but he elected to keep his name out of the headlines until now.

Some of the people O’Neill served with have come forward to dispute his version of the events regarding what happened during the 2011 raid on bin Laden’s compound in Abbottabad, Pakistan, and others have accused him to trying to use his experiences to cash in by becoming a motivational speaker.

“He served with great distinction, he had a great career and he was a great operator. But he went from hero to zero in the Seal community when he started using his career to cash in and draw crowds as a speaker,” former SEAL Jonathan Gilliam told theTelegraph. “This reflects terribly on all of us and does not represent who we are.”

When it comes to mixing up Obama and Osama, CNN isn’t the first to make that mistake. Everyone from former U.S. Attorney General John Ashcroft to GOP presidental nominee Mitt Romney to lefty talking head Chris Matthews to deceased Mass. Sen. Ted Kennedy has also screwed it up.