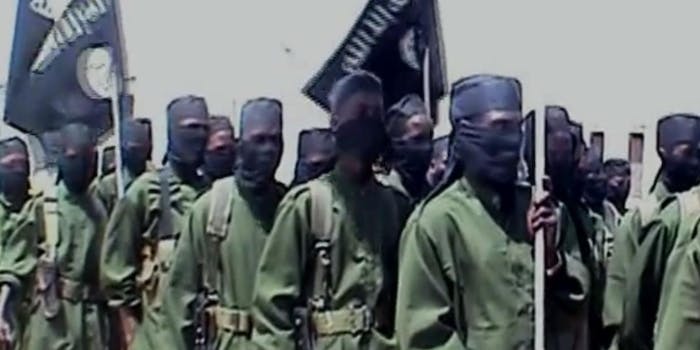 That'll teach CNN to be more careful with its labels.

Kenyans are furious at CNN for calling Kenya a “hotbed” of terrorism, and they’re venting their frustration at the network in a powerful, constructive way.

The CNN story by Barbara Starr, the network’s Pentagon reporter, carried the headline “SECURITY FEARS AS OBAMA HEADS TO TERROR HOTBED.” CNN’s Twitter account promoted the story with a tweet reading, “President @BarackObama isn’t just heading to his father’s homeland, but to a hotbed of terror.”

Kenyans found the story preposterous and insulting, and they responded on Twitter en masse with the hashtag #SomeoneTellCNN, which became a global trending topic.

Kenyans on Twitter know perfectly well that their country faces threats and challenges related to terrorism. The Somalia-based terror group Al Shabaab has been harassing the country for several years, bombing the Westgate Mall and Garissa University, among other targets. But Kenyan Twitter users took issue with what they saw as a typical reduction of a complex country into a tired trope. So they used the hashtag to bash both CNN and the racist clichés that still find root in Western media stories.

But their tweets didn’t just criticize and mock. They also celebrated Kenya as a place of growth and innovation.

Someone going by the username “Soko Analyst” called CNN a “hotbed of errors.” The Daily Show host Jon Stewart would no doubt agree.

Dear #KOT, allow me to introduce you to @CNN, the hot bed of errors in global media #SomeOneTellCNN pic.twitter.com/tKsY7uWY9o

Kamakil’s “Horrifying images from the #HotbedOfTerror” include the movement of wildebeest across the savannah, which we suppose would be terrifying if you got in their way.

Edward Sila Masaku tweeted a graphic called “The Real Nairobi vs How CNN sees Nairobi,” contrasting the cityscape with images of terror.

Joe Ndungu wrote, “If you have to do negative stories start with your own,” and included images of U.S. homelessness.

#SomeoneTellCNN If you have to do negative stories start with your own pic.twitter.com/1OK06XZeiD

The hashtag has driven CNN to change the story’s lede. It now calls the region in which Kenya sits a hotbed of terror. The network also changed the headline from “TERROR HOTBED” to “FATHER’S HOMELAND.”

Although it seems unlikely that the mess CNN made of their reporting is really a “sustained campaign” to smear Kenya, as Interior Secretary Joseph Nkaissery said, Nkaissery’s accusation that it “demonstrates heightened irresponsibility by the media network and smacks of arrogance” is much harder to dismiss.

There has been a lot of reasonable criticism of clicktivism. Most people must surely realize by now that liking something on Facebook can’t change much in the real world. But social media can do a few things very well—including raising the profile of issues and, sometimes, even getting results. Hashtags in particular are easy ways of catalyzing support for a movement. #BlackLivesMatter demonstrated this, and now #SomeoneTellCNN has done the same.