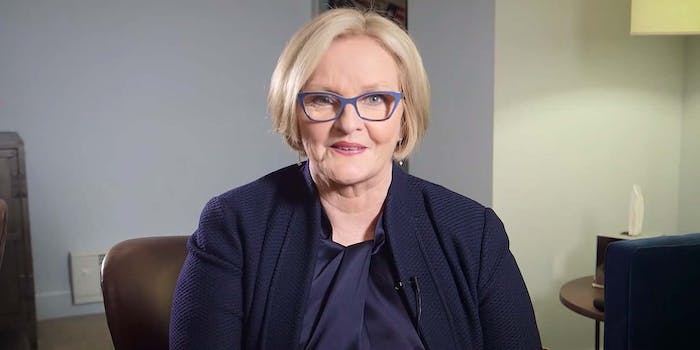 That isn't the only hot-button topic she tackles.

“As one of just 20 women current serving in the senate, it’s important for me to encourage more women to run for office,” the Democratic lawmaker from Missouri said in a video for The Late Show with Stephen Colbert. “But, equally important, is encouraging more men to just shut the hell up. It’s not that women don’t value your thought; it’s just that we don’t value all of them.”

While the first thing she wanted man to shut the hell up about was the most overtly political—“what women do with their bodies”—everything else on her list seemed primed to make dudes on the Internet full-on ragequit existence if they had to actually stop opining about them.

Before certain corners of the Internet drown themselves in male tears from obvious trolling, it’s important to note that one item in McCaskill’s list requires closer examination: Star Wars.

It's a joke silly. Love your bro pic. https://t.co/QTtskdotrX

McCaskill mentions Star Wars twice to emphasize how over she is hearing men’s opinions about it. In fact, the world would probably be a better place if people of all genders stopping weighing in on Star Wars until The Force Awakens comes out. Unless, of course, their hot takes are at least as good as the one about Jar Jar Binks being a secretly brilliant Sith Lord pulling the strings behind the whole prequel trilogy.

In a recent essay for Politico, McCaskill detailed how, during her 2012 re-election campaign, she realized she’d have a much easier time beating arch-conservative Todd Akin than the more moderate John Brunner, who were running against each other in the GOP primary. McCaskill started running an ad supposedly attacking Akin from the left, but it was actually built to made him look better in the eyes of conservatives. McCaskill spent $1.7 million on the ad. Akin won the primary, subsequently made some extremely questionable comments about “legitimate rape,” and got clobbered by McCaskill in the general election.