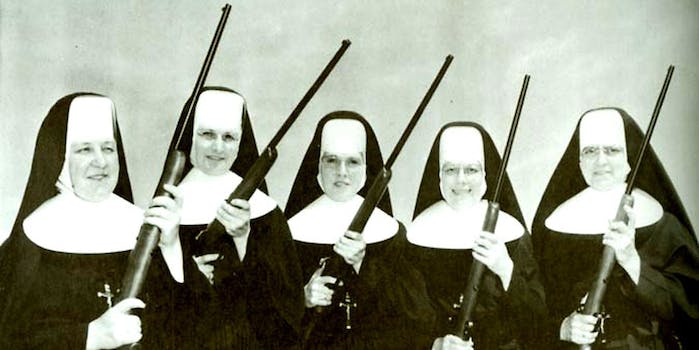 Today the U.S.  Tenth Circuit Court of Appeals ruled that religious nonprofits have to comply with the government’s so-called “contraceptive mandate.”

That mandate’s name is a bit of a misnomer: Nonprofits and church groups who object to funding birth control can easily opt out of the coverage by filing a simple form with their health-insurance provider. The nonprofits in the class action lawsuit do not want to fill out an exemption form. Doing so, they say, would mean allowing their employees to get access to contraception anyway since the government mandates third-party access. Today’s decision means they still have to fill out the form.

Leading the pack of mostly Catholic and Baptist organizations appealing to the court was the national nuns’ charity Little Sisters of the Poor, joined by its insurance company Christian Brothers Services, a slew of religious universities, and an evangelical foreign missionary nonprofit called Reaching Souls International. In a statement, the Little Sisters’ Mother Provincial Loraine Marie Maguire expressed disappointment.

“Religions and religious leaders support access to contraception and believe that such access is a moral good.”

“As Little Sisters of the Poor, we simply cannot choose between our care for the elderly poor and our faith,” Maguire said. “And we should not have to make that choice, because it violates our nation’s commitment to ensuring that people from diverse faiths can freely follow God’s calling in their lives. All we ask is to be able to continue our religious vocation free from government intrusion.”

For the past year, it seemed as if the Little Sisters and their attorneys at the Becket Fund for Religious Liberty had won. In January 2014, the Supreme Court issued an injunction that blocked the group from having to comply with the U.S. Department of Health and Human Services mandate while they prepared to appeal. Now that the appeal has been denied, it looks like the entire case will move forward to the Supreme Court for a final ruling. The Becket Fund announced today that they would take the case forward, if necessary, once the current ruling has been thoroughly reviewed.

“It is a national embarrassment that the world’s most powerful government insists that, instead of providing contraceptives through its own existing exchanges and programs, it must crush the Little Sisters’ faith and force them to participate,” Becket Fund senior counsel Mark Rienzi said in a statement. “Untold millions of people have managed to get contraceptives without involving nuns, and there is no reason the government cannot run its programs without hijacking the Little Sisters and their health plan.”

But if religious nonprofits like Little Sisters of the Poor can simply opt out of coverage by sending a form to their insurer, what’s the big deal?

The opposition centers on the way the government accommodation works: Once the nonprofit opts out of insuring contraceptives, the insurance company must offer birth control to employees anyway, at the government’s expense. The Tenth Circuit Court’s ruling today made clear that the exemption form only exempts the nonprofit, not its insurer or third-party administrator (TPA), from paying for birth control. From the ruling:

The back of the Form notifies TPAs of their obligations. It informs the TPA that the eligible organization “[w]ill not act as the plan administrator or claims administrator with respect to claims for contraceptive services, or contribute to the funding of contraceptive services.”  It identifies regulations requiring the TPA to provide contraceptive coverage without cost sharing to plan participants and beneficiaries if the TPA agrees to continue providing administrative services for a group health plan. A TPA that receives the Form from an objecting employer is eligible for a government payment to cover the costs of providing contraceptive coverage. As part of this scheme, the regulations initially included a non-interference provision, which specified that objecting religious non-profit organizations “must not, directly or indirectly, seek to influence the third party administrator’s decision” whether to provide coverage for contraceptives.

It’s a tricky workaround that insures all women have access to the healthcare they need without employers—even religious employers—being able to completely prevent it.

Not every religious nonprofit wants to prevent people from access to contraceptives—in fact, the majority remain unruffled, said Religious Institute Deputy Director Marie Alford-Harkey in an email to the Daily Dot.

“While there are some religious groups who object to providing modern methods of contraception, there are far more who recognize its benefits,” Alford-Harkey said. “More than fourteen denominations and movements officially support family planning and have statements to that effect.”

In 2014, the Religious Institute wrote an open letter supporting family planning (read: birth control) that was signed by hundreds of religious leaders. The letter described a “moral imperative to access” and opposed “any attempt to make specific religious doctrine concerning pregnancy, childbirth, or contraception the law of any country in the world.”

“Untold millions of people have managed to get contraceptives without involving nuns.”

The Supreme Court’s ruling in favor of Hobby Lobby, which actually did exempt closely-held corporations from having to comply with the accommodation forms, was deemed to not apply to religious nonprofits. That means closely-held corporations, churches, and other religious orders are completely freed from complying with the contraceptive mandate as well as the workaround exemption form, but religious nonprofits have to follow the accommodation scheme.

However, even though the Supreme Court ruled in favor of Hobby Lobby, the Tenth Circuit Court had ruled against—telling the corporation that they had to either participate in the HHS scheme or pay millions in fines. Because of the discrepancy between the circuit court and SCOTUS, it’s tough to say how the Supreme Court will rule if the Little Sisters case ends up on the docket.