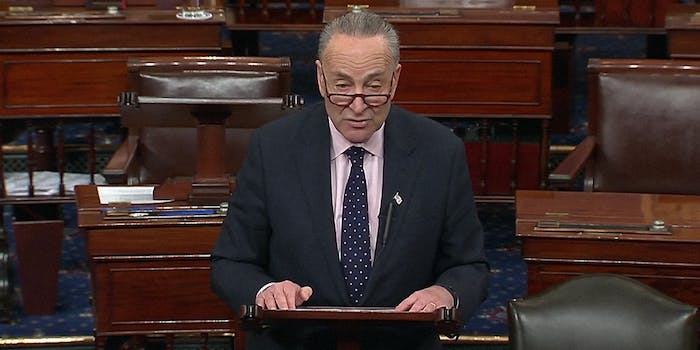 He doesn't think Gorsuch will be an independent or neutral judge.

The Supreme Court confirmation hearing for Judge Neil Gorsuch is still underway, but Senate Minority Leader Chuck Schumer (D-N.Y.) has already made up his mind.

He announced Thursday that he will not vote to confirm Gorsuch to the Supreme Court.

The decisions made in the Senate over the next weeks about Judge Gorsuch, as w/ any SCOTUS nom, will echo thru that judge's lifetime tenure.

After careful deliberation, I have concluded that I cannot support Judge Neil Gorsuch’s nomination to the Supreme Court.

Judge Gorsuch's nomination will face a cloture vote & as I’ve said, he will have to earn sixty votes for confirmation. My vote will be “No.”

Schumer, who previously called for the Senate to delay voting on Gorsuch’s nomination because of the FBI’s ongoing investigation into President Donald Trump’s alleged ties with Russia, took to the Senate floor to explain his reasoning, citing Gorsuch’s inability to answer specific questions or convince him that he’d be neutral.

“Judge Gorsuch was unable to sufficiently convince me that he’d be an independent check on a president who has shown almost no restraint from executive overreach,” Schumer said.

Al Franken asks Neil Gorsuch why he ruled against truck driver fired for abandoning his vehicle in -14 degree cold. pic.twitter.com/kzP357zdmu

Schumer also stated that he would support an effort to filibuster Gorsuch’s nomination and called out Republican colleagues who have urged a change to the rules in the future so that Supreme Court Justice nominations would only need a majority vote to schedule a final vote.

“If this nominee cannot earn 60 votes—a bar met by each of President Obama’s nominees, and George Bush’s last two nominees—the answer isn’t to change the rules,” Schumer said. “It’s to change the nominee.”

Meanwhile, according to Politico, several Democratic senators are contemplating offering Republicans a deal: let Gorsuch through, in exchange for a commitment to not kill the filibuster the next time a Supreme Court nominee comes up.

You can watch Schumer’s statement below.

Judge Gorsuch’s record shows that he sides far too often with the powerful few over everyday Americans trying to get a fair shake. More on my views LIVE this morning: