Dr. Christine Fair, a professor of Security Studies at Georgetown University, was suspended from Twitter yesterday following a tweet about the Republicans on the Senate Judiciary Committee.

Fair was briefly reinstated, only to be suspended again, after she was reported for including someone’s email in a tweet.

“Look at thus [sic] chorus of entitled white men justifying a serial rapist’s arrogated entitlement. All of them deserve miserable deaths while feminists laugh as they take their last gasps. Bonus: We castrate their corpses and feed them to swine. Yes?” Fair wrote on Sept. 29. 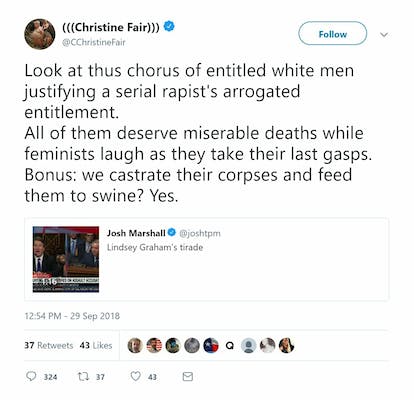 After she received a suspension, conservative outlets like Fox News and the Daily Caller wrote about the incident, expressed concern about Fair’s potential bias in the classroom. Some on Twitter called for Georgetown to reprimand her.

You should see many of her other tweets! She is seriously messed up! I can imagine students being scared to state any opinion which could differ from her extreme man hating views

@Georgetown What say you? Is this acceptable to you?

If Georgetown doesn’t do something about this, its federal contracts & Federal student loans should be pulled/ended.

Georgetown. When are you going to fire this violent woman? She is unstable and a danger to kids. #Georgetown

After her account was reinstated and the offending tweet deleted, Fair tweeted, “Fox News Failed to silence me.  Thank you all for sending @Twitter messages of support. I do NOT and NEVER have condoned violence. My tweet, as I have explained, was an attempt to make YOU as UNCOMFORTABLE as I am using the language of the abuse I receive by the hundreds.”

It appears, however, that Fair has been suspended again, after tweeting out an email address from someone who had sent her threatening emails.

Reported for targeted harassment and doxxing

Fair has tweeted anti-Trump and anti-Kavanaugh sentiments in the past. Georgetown University told the Daily Dot that the tweets are Fair’s private speech.

“The views of faculty members expressed in their private capacities are their own and not the views of the University. Our policy does not prohibit speech based on the person presenting ideas or the content of those ideas, even when those ideas may be difficult, controversial or objectionable. While faculty members may exercise freedom of speech, we expect their classrooms and interaction with students to be free of bias and geared toward thoughtful, respectful dialogue.”

Do you have a sister named #LorenaBobbit? Just asking for all #WhiteMen on planet earth

Why single out white men? It didn’t make me uncomfortable it’s just vile. My guess is from the looks of you that you never reproduced. Thank God for that. No bad pupils just bad teachers like you. The outcome for you will be biblical.