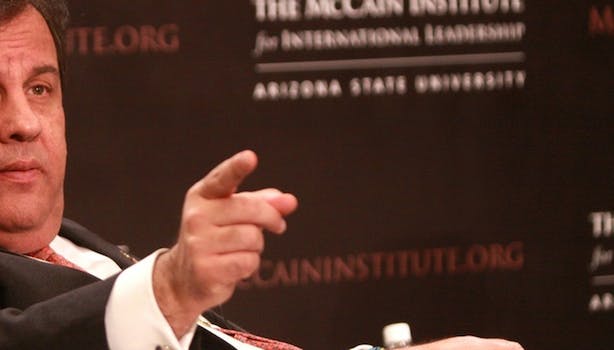 U.S. politics just got its groove back.

Whoever said politicians don’t know how to have a little fun?

On Saturday night, New Jersey Governor Chris Christie, who many believe has plans for a presidential run, opened up a new front in the presumptive 2016 Republican presidential primary by flaunting his dance moves on stage with Jamie Foxx.

The governor was attending a benefit concert at the Apollo Theater in New York City when Foxx invited him on stage to show off for the crowd.

“I know you’ve got a dance in you, Chris Christie,” Foxx said, according to the New York Post. The Post story includes a photo of Christie, who “raced to the stage for some rambunctious gyrating” with Foxx.

Christie wasn’t the only Republican politician getting jiggy with it at the Apollo benefit, which also featured Jon Bon Jovi, Pharrell Williams, and Gladys Knight. Sen. John McCain (R-Ariz.) emerged out of the audience and did the robot with Foxx.

Had a good time this weekend with @iamjamiefoxx, supporting a worthy cause @apollotheater http://t.co/RV3qVIfhRi

Gov. Christie’s acclaimed on-stage gyrating would have continued had the governor not misunderstood Foxx’s verbal encouragement as a wrap-up signal. After he “gamely hopped up to crunk with Mr. Foxx and his band,” in the words of the Wall Street Journal, Christie heard Foxx tell him, “Now, 5, 6, 7, 8, go, go, go, go,” and assumed that it was time for him to “go, go, go, go” back to the audience.

Christie, whose career as a straight-shooting, get-it-done state executive was marred by the “Bridge-gate” scandal that broke last year, received high praise from a fellow audience member as he left the stage. “I told him, as he walked back to his seat, ‘Governor, you can’t let New Jersey down,’” Jack Nicholson recounted to the Post.

This isn’t the first time Christie has cut loose for a roaring crowd. He last showed off his moves on The Tonight Show Starring Jimmy Fallon, performing questionable dance moves like the “Back It Up,” in a segment entitled “The Evolution of Dad Dancing.”

Asked to comment on Christie and McCain’s performances, Foxx said, “It’s always the ones you don’t expect. Republicans love to dance — in the Hamptons.”