And it's displaced thousands of locals.

Imagine someone knocking on your door and asking you to leave your house so they could look for aliens. Now imagine you didn’t have a choice.

That is what is happening in China where more than 9,000 residents are abandoning their homes to be replaced by a giant telescope. That telescope’s main purpose is to find extraterrestrial life on other planets. 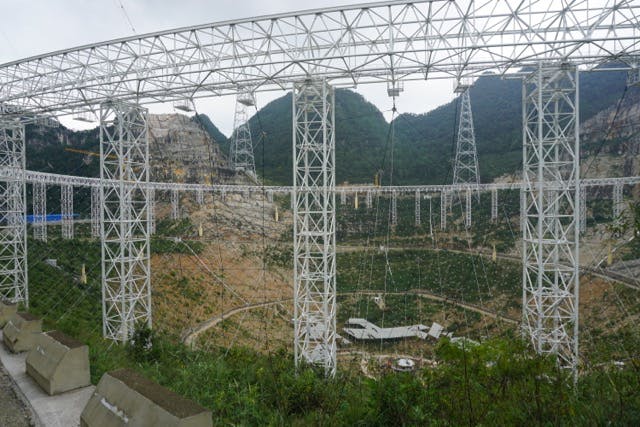 It’s not all bad news though. Each resident forced to relocate one of China’s poorest regions is being paid 12,000 yuan or $1,800 according to Xinhua News Agency. That number represents a fraction of a fraction of the 1.2 billion yuan or $181.5 million it will cost to create the telescope.

The FAST, or five-hundred-meter Aperture Spherical Radio Telescope, will be the largest telescope of its type in the world. It will have 4,500 panels, each 11 meters long programmed to move up and down so the entire satellite can reshape itself. Given its size and capabilities, the telescope will have more jobs than just looking for life outside Earth.

The current largest telescope in the world is the Arecibo Observatory in Puerto Rico which was completed in 1963. (That’s right, the telescope from GoldenEye.) Arecibo has been successful in determining the rotation period of Mercury, discovering the first binary pulsar, and taking a detailed image of an asteroid for the very first time.

FAST will be almost twice as large.

China broke ground in Guizhou Province in 2011 and is hoping to complete the project by September.

“The FAST’s sensitivity and resolution will allow an extremely comprehensive study of thousands of galaxies in different environments in the local universe,” Lister Staveley-Smith, an astronomer at the University of Western Australia, said in an email to China Daily.

This might all sound like the start of a political sci-fi film, but the FAST could allow humans to see space like never before and find discoveries along the way. Until then, it is an oversize telescope that just put 9,000 people out of their homes.