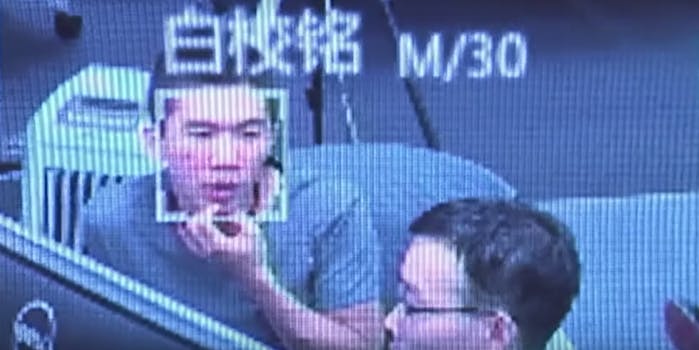 China is using predictive AI to stop crimes before they happen

The software uses a rating system to identify groups of highly suspicious people.

China is using artificial intelligence to predict crime before it happens, according to a Financial Times report. No, there won’t be any psychic precogs. Instead, China will use facial recognition technology and predictive analytics to warn police of potential criminals.

Facial recognition company Cloud Walk is spearheading the effort using a system that tracks people’s movements and behaviors to assess how likely they are to commit a crime. For example, the system may see someone visit a weapon store on a regular basis and conclude that they are more likely to act out. The company is currently trialing the software, which would automatically notify the police if it considers the odds of someone committing an offense to be “dangerously high.”

“The police are using a big-data rating system to rate highly suspicious groups of people based on where they go and what they do,” a Cloud Walk spokesperson told FT. That rating increases when someone “frequently visits transport hubs and goes to suspicious places like a knife store.”

The company’s invasive software is already integrated into police databases in more than 50 cities and provinces. Those databases are filled with personal information on millions of Chinese citizens gathered for years by the surveillance state’s government. New technologies have only made it easier for the government to track the activities of its citizens. The facial recognition software combined with gain analysis and surveillance footage is reportedly able to recognize people even if they are found in a different spot wearing different clothes than when they were first seen.

“We can use re-ID to find people who look suspicious by walking back and forth in the same area, or who are wearing masks,” Leng Biao, professor of bodily recognition at the Beijing University of Aeronautics and Astronautics, told the Financial Times. “With re-ID, it’s also possible to reassemble someone’s trail across a large area.”

The systems aren’t just being used to prevent potentially fatal offenses. As Mashable points out, petty crimes like jaywalking or stealing toilet paper are also being monitored. The AI is also being used with “crowd analysis” to identify suspicious behavior in densely populated areas.

Chinese law does not currently allow charges to be made based on predictions if someone did not commit a crime.

Several other countries including the United States are also trying to predict crime using data analytics. In Chicago, police are using a formula based on record combinations, gang affiliations, and other bits of information, to figure out who is likely to shoot someone else. And a report from the Washington Post introduced the country to PredPol, a controversial software used to predict crimes in 20 of the 50 largest police forces in the U.S.