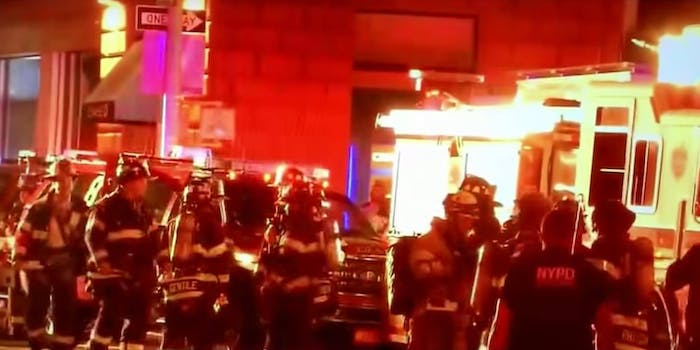 A second device was found nearby, resembling the pressure cooker device used in the Boston bombings.

Police are still investigating the cause of an explosion in New York on Saturday night, with 29 people injured in Manhattan’s Chelsea neighborhood.

Mayor Bill de Blasio described the explosion as an “intentional act,” but also said “there’s no specific and credible threat against New York City at this time from any terror organization.”

The explosion took place at 23rd Street and 6th Avenue at 8:30 pm, and is thought to be the result of a device left in a nearby dumpster. A second device, which was removed by the NYPD’s bomb squad at 2:25 am, was found several blocks away on West 27th Street. Photos show a pressure cooker with a cell phone attached, a similar design to the homemade device used in the Boston bombings.

BREAKING PHOTO! Here is the second device found by a NYSP Sgt. At 27 street and 7 Ave. investigation is ongoing pic.twitter.com/x7o9Rr30I3

Surveillance video from a local fitness center shows people running from the explosion as debris flies across the street.

The police do not have a specific suspect yet, and are not speculating publicly about any possible motive for setting the device. At the moment, investigators are collecting video and photos of the explosion from members of the public.

It's so scary. The explosion was so loud & strong. My Appartment shook. #chelsea #nyc #explosion pic.twitter.com/61Cxla4gZk

Hillary Clinton and Donald Trump have both made statements about the explosion, with Clinton speaking to the press from her campaign plane. She spoke out in support of first responders, and cautioned the public to be patient as the investigation progresses.

Hillary Clinton on NYC explosion: "We should withhold judgment until we know more" https://t.co/gtE1bR4PRZ https://t.co/wyUKj8Zdyb

While Clinton advised people to wait until there was more concrete information about the explosion, Donald Trump was quick to characterize the incident as a bombing.

Speaking at a campaign event in Colorado Springs on Saturday night, he said, “I must tell you that just before I got off the plane a bomb went off in New York and nobody knows what’s going on.” On Sunday morning, he tweeted a message of support to those who were injured in the explosion.

I would like to express my warmest regards, best wishes and condolences to all of the families and victims of the horrible bombing in NYC.

Trump’s use of the word “condolences” implies that there were fatalities, but this is not the case. 29 people were injured, one critically, and several have already been discharged from local hospitals.

Update 3:17pm CT, Sept. 18: Additional details have emerged regarding the devices used in the Chelsea bombings. Though the motive of the suspect is still unclear, it appears as if the devices used in Chelsea and Seaside Park, New Jersey were not only related but detonated via cellphone.

The device in Seaside Park, NJ device and the one that exploded in New York both were set off with cell phones

Hillary Clinton has released a lengthier statement about the incidents as well as an incident in St. Cloud, Minnesota in which a part-time security guard stabbed at least nine people in a mall on Saturday night.