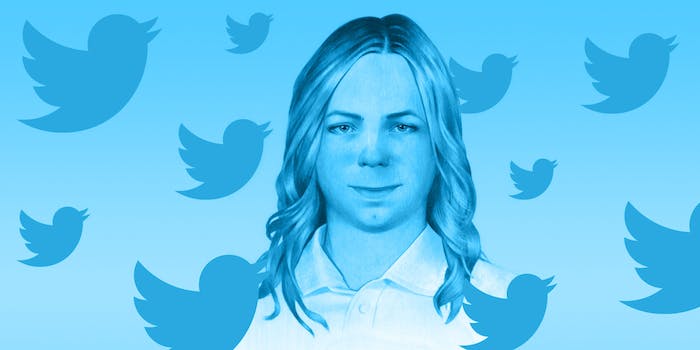 Chelsea Manning, likely the most famous imprisoned American whistleblower in recent history, is now tweeting from behind bars.

She’s doing it indirectly, of course. Manning, the former Army intelligence analyst convicted of giving WikiLeaks troves of classified material—including a video of a military helicopter casually killing civilian reporters in Iraq—isn’t allowed to have a smartphone in her cell. Instead, she relies on her public-relations firm to transcribe her phone messages.

“Fitzgibbon Media is handling my account for the time being,” Manning told the Daily Dot via the firm. “I plan to tweet as freq. as possible; daily to weekly.”

I’m hoping to stay connected w/ this account as much as poss., but would rather tweet about more meaningful things than not #lessismore

It will be hard, but I don’t want this Twitter feed to be a one-way street/conversation