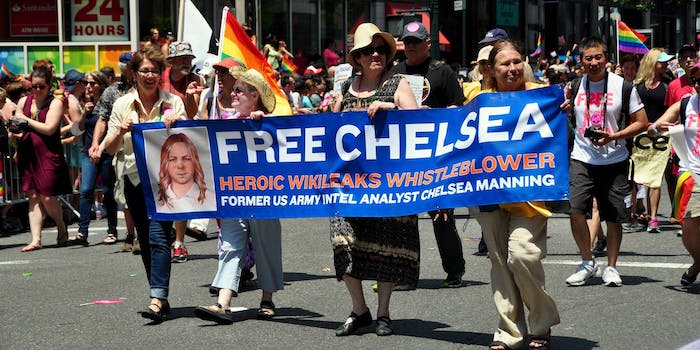 Fight for the Future's prior petition supporting Manning had over 100,000 signatures.

Nearly one month after a suicide attempt, Chelsea Manning received the shocking news that she was facing potential new charges. Those allegations include “resisting the force cell move team,” possession of “prohibited property,” and “conduct which threatens.”

A petition has been launched by Fight for the Future to combat those allegations. The civil liberties nonprofit had previously created a wildly successful petition which garnered over 100,000 signatures and it’s hoping to see similar support for Manning, who is serving a total of 35 years in prison for leaking sensitive government documents to WikiLeaks in 2010. Manning was sentenced in 2013.

The organization’s prior petition sought to combat solitary confinement threats lobbed against Manning over contraband items that allegedly included an expired toothpaste tube and the July 2015 issue of Vanity Fair featuring Caitlyn Jenner. Manning once again appears to be threatened with a similar punishment.

If convicted, the remainder of her sentence could be spent in solitary confinement. Her chances for parole would come into question and her status could be changed to maximum security.

Manning attempted suicide on July 5 and was subsequently taken to a hospital near the U.S. Disciplinary Barracks in Leavenworth, Kansas, where she is being held. According to Fight for the Future, Manning was unconscious when she was moved by the force cell team. Nonetheless, she is being investigated for resisting.

Regarding the latter two charges, both stem from the items Manning used to attempt suicide and the intention behind her actions. To be punished for such a mental health crisis points to larger problems at the facility and the Army as a whole when it comes to dealing with healthcare issues.

In a statement following the charges coming to light, ACLU Staff Attorney Chase Strangio called the development “unconscionable” and expressed support for the veteran in hopes that she would receive adequate medical care.

“The government has long been aware of Chelsea’s distress associated with the denial of medical care related to her gender transition and yet delayed and denied the treatment recognized as necessary. Now, while Chelsea is suffering the darkest depression she has experienced since her arrest, the government is taking actions to punish her for that pain,” Strangio stated.

As of press time, it’s unclear how many signatures the petition has. A status bar indicating as such has been removed. Prior to its removal, at least 200 people had signaled their support for Manning.

Update 11:19am CT, July 30: This article has been updated to include the fact that Manning is not facing criminal charges. Regarding the potential for up to nine years in medium custody, the Daily Dot has reached out to the ACLU for clarification as to how that would be served and is awaiting a response. This piece has also been updated to clarify that Manning leaked sensitive documents in 2010 and was convicted and sentenced in 2013. This piece has been updated to correct the month of Manning’s suicide attempt.