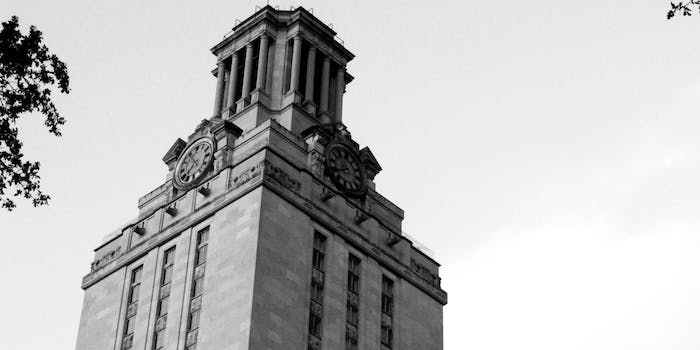 On Aug. 1, 1966, 25-year-old student and former Marine Charles Whitman climbed to the top of the clock tower at the University of Texas at Austin with rifles, shotguns, and handguns. He held the world hostage as he took the lives of 14 people and wounded more than 30.

On the 50th anniversary of the mass shooting, the U.S. continues to grapple with the aftermath. In 2016 alone, 1,396 people have fallen victim to gun violence resulting in 378 gun-related deaths, according to Mass Shooting Tracker. The country remains divided as the controversial Senate Bill 11 goes into effect today. Backed by Gov. Greg Abbott and his Republican legislature, the campus-carry law allows UT students 21 and over with concealed handgun permits to carry them into classrooms, school buildings, and dorms.

The tower shooting was the first of its kind to be broadcast on television, making it especially easy for the entire world to empathize. It opened up a dialogue that transformed mental health services on campuses and inspired the creation of university-commissioned police forces. But despite an increase in eyewitness testimonials and oral histories in the past decade, actual researched history of the tower shooting is somewhat sparse.

For the past seven months, 11 UT students led by Professor Joan Neuberger have worked to change this. The product of the semester-long undertaking is behindthetower.org—a digital project that consists of 15 historical essays raising questions that have either been forgotten or that have yet to be asked.

“Bullet holes remained in the concrete and balustrades around the tower when I arrived at UT as an Assistant Professor in 1990, but no visible commemorative marker of the events of that day existed on the UT campus,” Neuberger writes in the archive. “These are events that cry out to be studied. They are also events that raise important questions about commemoration, about public remembering and forgetting, and about the uses of public history.”

With limited knowledge of the shooting beforehand, the students conducted their research with archives found at the Briscoe Center for American History and the Austin History Center. From there, each student gravitated toward their own questions and picked unique essay topics.

The essays cover issues including police response, student life, Texas gun culture in the 1960s, Whitman’s drug use and physical and emotional condition, campus counseling services, the university’s response, and the nature of remembering and forgetting traumatic public events. There are also biographies for each of the victims.

The project will eventually include an augmented reality application, and a comprehensive map and timeline that will allow people visiting Austin and the university campus to pinpoint crucial locations connected with the shooting using their smartphones, according to the College of Liberal Arts. In the meantime, the research project has uncovered tons of intel about the world-changing shooting.

The tower shooting was not the first U.S. mass shooting

The shooting is often referred to as the first U.S mass shooting. This statement stuck with UT history graduate student Maria Hammack, who researched the history of U.S. gun violence prior to 1966.

The first mass shooting on a college campus actually happened in 1891 when a man with a double-barreled shotgun fired upon a crowd of students and faculty attending a school exhibition in Parson Hall School House in Liberty, Mississippi, injuring 14. Hammack’s essay outlines a series of shootings throughout the 20th century.

Hammack says it’s important to learn the history of gun violence in the U.S. because it allows the public to learn from past mistakes.

“We tried to commemorate the 50th anniversary and we tried to help people remember what happened because we believe that learning the histories of these people involved can give us a better sense of that history and how to heal, how the community can move on,” Hammack tells the Daily Dot. “I think that by reading the histories we wrote people can understand more of what happened and can maybe try to work toward ensuring things like this don’t happen again.”

There was no university police force until after the shooting

Prior to 1966, most universities in the U.S. did not have a commissioned police force trained to respond to on-campus emergencies, such as shootings. The closest thing UT had to a police force in the ‘60s was the Traffic and Security Service, and its officials mostly wrote parking tickets, supervised traffic, and provided security around campus. They were not allowed to carry weapons.

“The UT tower shooting along with the Watts riots of the previous year produced a national consciousness about the need for new specialized training and resources for responding to violent events,” Justin Krueger writes in his essay on policing. “Across the nation, police departments reviewed their preparedness, training, and capabilities to effectively respond to such situations. Most found major gaps and massive issues that had to be addressed. Special Weapons and Tactics (SWAT) teams were developed as a direct response to the UT tower shooting.”

In response to the shooting, Senate Bill 162 was passed in Texas on April 27, 1967. The bill allowed institutions of higher learning to create police forces to protect students and faculty and led to the establishment of the University of Texas System Police Department and Police Academy.

Whitman’s drug use was rampant

Professor Neuberger found Whitman’s state of being before the shooting particularly important.

“One of the things that was not mentioned in some of the work that has been done was Charles Whitman’s drug use,” Neuberger says. “In the years and months leading up to the shooting, though perhaps not in the days right before, he was using a lot of dexedrine and a lot of tranquilizers. He was clearly suffering and that was one of his ways of coping with it, which just made things worse.”

The website notes that Whitman suffered from child abuse, anxiety, and serious physical and mental illness in the months before the shooting and he sought help for from an on-campus psychiatrist, who sent him home. Whitman’s mental state and his attempts to seek help through counseling is one of the most tragic aspects in the untold part of Whitman’s story, Neuberger says.

“There’s a real bias against talking about the shooter,” Neuberger says. “We all came away feeling that everybody’s story needs to be told and be heard, including the shooters.”

After the shooting, a 32-person committee convened by Texas Gov. John Connally recommended  “that The University of Texas have the best possible health program in the broadest meaning of the term for both students and faculty,” according to Rebecca Johnston’s report.

“The committee’s recommendations on how to deal with the aftermath of the shootings, and try to prevent similar events in the future, went far beyond symbolic ‘thoughts and prayers,’” Johnston writes.  “The report helped to galvanize fundamental reform of mental health care practices at the University of Texas—a side of the tragedy’s legacy that has largely been forgotten.”

Prior to 1966, psychiatric and mental health services on campus were provided by the “Mental Hygiene Clinic” of what was then called the Student Health Center and Johnston writes that many students said that the services were not enough. Following the shooting and the committee’s recommendations, the services were completely expanded and reformed by 1969.

It remains unclear whether armed civilians helped or hindered police

As the U.S. debates the costs and benefits of campus carry, the shooting is often used as an example by both gun rights activists and those who want guns banned on college campuses.

When Whitman began shooting civilians from the tower, the Austin Police Department was unprepared, only carrying handguns which couldn’t do any damage to Whitman—too far up. Bystanders ran home, returned with rifles, and began shooting at Whitman.

With Isaac McQuistion’s essay on armed civilians, he notes that eyewitnesses recalled shooting from the tower decreasing after civilians began firing and therefore lessened the total fatalities in the end. However, the armed civilians also caused confusion and more danger.

“In a press conference after the shooting, Texas Governor John Connally said that the ground fire impeded the progress of officers to the top of the tower,” McQuistion writes. “After [officers] McCoy and Martinez killed Whitman, they then had no effective way of telling those on the ground to stop firing. Crum waved a white flag, but even after that, sporadic ground fire continued.”

Behindthetower.org shows there is much that can be learned from tragedies that happened in the past. Graduate student Itza Carbajal tells the Daily Dot she believes creating digital archives and remembering history is important because it adds perspective when similar events happen today.

“It’s about creating access to these stories so that not just younger people but everyone can know what is happening or what happened to give them perspective of what they’re going through or to at least understand what’s going on around them,” Carbajal says. “The UT tower shooting is really vital to us understanding today, especially in a higher education space.”