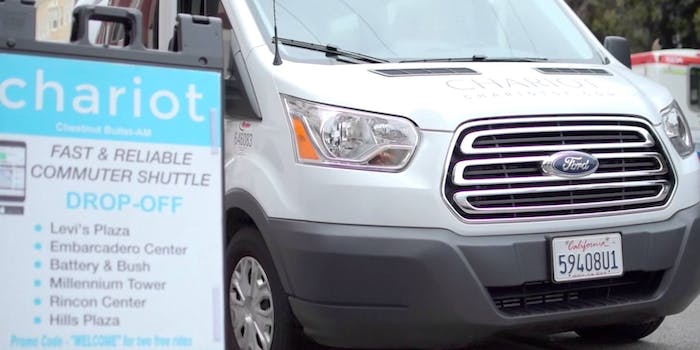 With Ford's acquisition, Chariot may roll beyond the Bay Area.

Chariot, the San Francisco-based commuter shuttle company, has been acquired by Ford Smart Mobility the division of Ford Motor Company focused on emerging transportation technology solutions. This is its first acquisition since being established in March 2016.

Chariot’s crowd-sourced shuttle service lets riders select routes and, based on demand, the company comes up with the most efficient way its 15 seat charter vans can get around the city to pick up commuters. A ride can cost any where from $3 to $5 depending on the time of day.

Chariot’s CEO, Ali Vahabzadeh says the company’s Ford Transit vans “caught the attention of the people at Ford. Once we realized that our vision was one and the same, it became apparent that we have a lot of shared values,” said Vahabzadeh.

The acquisition will allow the on-demand shuttle company to scale, and it will move Ford into the transportation services business, joining several other American automakers in the ridesharing game. Last year, GM invested $500 Million into Lyft to help fund the startups implementation of driverless cars.

Chariot currently has 28 routes in San Francisco with plans to add more routes in downtown S.F. and increase staff there. However in a statement on Friday, Ford said there are plans to provide transportation options in at least five other markets in the next 18 months.

It’s still unclear what, if any, impact this acquisition will have on other ridesharing companies and the commuter options those apps offer like UberPool and Lyft Line, but one thing is certain: with so many low cost ridesharing options currently available, there aren’t many gaps left in the market.

The acquisition likely seems to be more of a technology play. Chariot, like other ridesharing apps, are much more valuable for the logistical technology it provides than the actual ridesharing service. These companies are creating long-term transportation solutions, that can impact every aspect of our lives. If Chariot can successfully solve the traffic congestion, and commuter issue using its “smart route” solution, the technology can easily be used to improve existing public transportation like buses or to improve efficiencies around postal delivery.

While on the surface, the acquisition seems to be focused on expanding the small startup’s coverage areas, it may also serve as a move on the part of both Ford and Chariot to lay the foundation for a possible future transportation logistics solution.