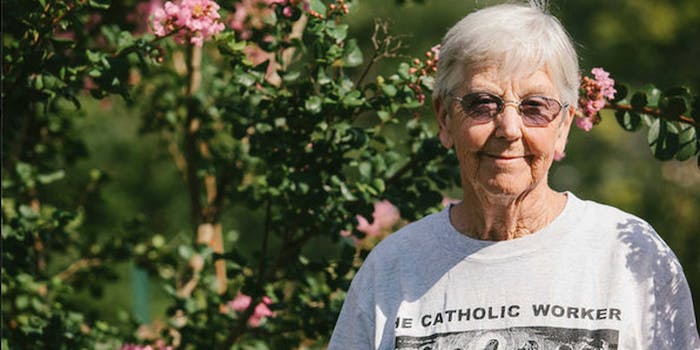 Sister Megan Rice was released after serving two years of a three-year sentence.

Sister Megan Rice is an 85-year-old Catholic nun. She’s also an anti-nuclear-proliferation activist, an all-around badass, and a convict who was just released after two years in federal prison.

In July 2012, Rice and two other Christian pacifists, Michael Walli, 66, and Greg Boertje-Obed, 59, broke into the Y-12 National Security Complex in Knoxville, Tenn. The facility is considered America’s “Fort Knox” of weapons-grade uranium, but, armed with a hammer and bolt-cutter, the nuns were able to easily sneak inside.

Rice, Walli, and Boertje-Obed spray painted peaceful messages of defiance on a nuclear-weapons warehouse. They also splattered human blood (which, as Mother Jones explained, is not quite as crazy as it sounds). After an hour, the three were apprehended and placed under arrest. They were later convicted of trespassing, destruction of government property, and, most seriously, sabotage, which lead to a 35-month sentence for Sister Rice. But last week, a federal appeals court ruled that their actions did not endanger national security—as implied by the charge of sabotage—and ordered their immediate release.

Appearing on MSNBC’s The Rachel Maddow Show just days after regaining her freedom, Rice said she’d do it all again.

“If it were necessary to do, surely,” she told Maddow. “We have to convey the truth that nuclear weapons are destructive of the planet.”

Sister Rice is said to have been the inspiration for an Orange is the New Black character. She’s also a real-life inspiration.

#SisterMeganRice demonstrates and defines the words #activism #courage & #democracy, as well embodies what is the very best about #America

@maddow Sister Megan Rice is my hero. God please truly bless her! My great thanks for her sacrifice!

“I think it’s the shared responsibility of everyone…whatever we’re doing to oppose and expose the abuse of nuclear weapons is equally important,” Sister Rice told Maddow. “There are so many angles of information that need to be exposed.”