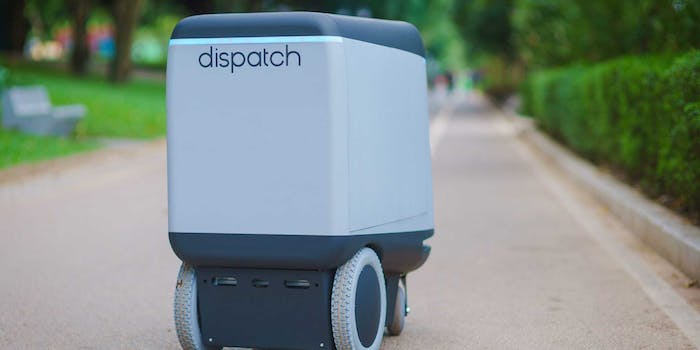 Carry wants to be your new drone mailman

Your dog will still hate it.

While most companies are considering ways to use drones for delivering packages, one startup has a plan that involves keeping its delivery bots grounded.

Carry is an autonomous delivery bot that could lighten the load for your neighborhood mail carrier. The robot, built by MIT computer-science experts Sonia Jin and Stav Braun and University of Pennsylvania roboticist Uriah Baalke for their company Dispatch Robotics, navigates sidewalks the way self-driving cars navigate roads to bring packages to your doorstep.

Carry, which looks like an oversized industrial printer, contains four secured compartments that can hold approximately one hundred pounds of goods at a time. A screen on the top of the bot displays information about its status. Package recipients can unlock Carry’s cubby using a mobile app.

The primary benefit of Carry for autonomous delivery is that the robot operates in existing places, traveling at low speeds on sidewalks and pathways. There is no need to dedicate space to it as is the case with airborne drones.

“On-­demand is a huge and growing market, but the last-­mile is still labor intensive and costly,” Baalke said in a statement. “Our self­-driving delivery vehicles will solve this. They operate 24/7, reduce emissions, reduce

cost, and scale with demand.”

The team behind Carry met while working on 3D reconstruction

algorithms as part of the research and development team at Floored, a company that creates interactive 3D graphics and technology for businesses.

Carry will get the chance to demonstrate its mail-carrying abilities in early 2016, when Dispatch Robotics launches pilot programs on select California university campuses. As long as it doesn’t leave a giant package under a tiny rug and act like that’s somehow hidden enough to prevent theft, Carry should have a job in its future.