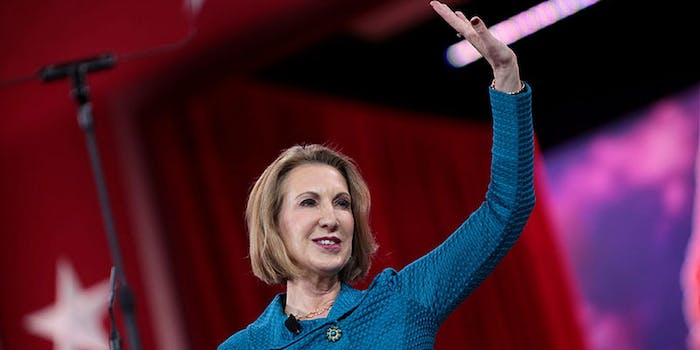 To be fair, you'd give the TSA a terrible review too.

Crafting a Yelp review is a sacred task. When an overworked waiter at a short-staffed restaurant forgets to refill your coke or your friendly neighborhood auto mechanic fixes whatever was making that horrible noise for under $100, it is your solemn duty as a person with an Internet connection and nothing better to do to let the world know about it.

This week, the federal government announced a partnership with the business review site to allow everyday citizens to give direct feedback to the faceless bureaucrats in beige cubicles that pull the levers inside the most complex organization in the history of human civilization. The goal of the project, spearheaded by the General Services Administration’s DigitalGov team, is to make government agencies more responsive to the concerns of the public. 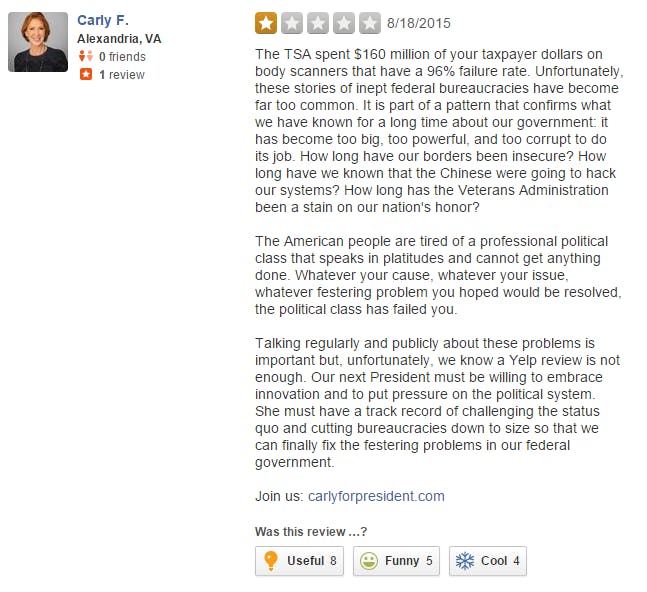 Complaining about the TSA is low-hanging fruit when it comes to obvious examples of government inefficiency, even for a Republican politician. The agency spent $160 million on airport body scanners that almost never did the one thing they were actually supposed to do—stop weapons and explosive devices from being smuggled onto airplanes.

The scandal is certain worthy of Firoina’s one-star rating. It’s toward the end of Fiorina’s post where things start to get a little dicey.

The candidate, who is coming off of a standout performance at the first Republican primary debate earlier this month, concluded her post with a “Join us” plug for her presidential campaign and a link to her campaign site. However, Yelp’s official Terms of Service prohibit commenting on the site as a means of self-promotion.

[Users are not allowed to] promote a business or other commercial venture or event, or otherwise use the Site for commercial purposes, except in connection with a Business Account and as expressly permitted by Yelp.

Yelp asserts it is under no obligation to enforce this rule entirely on its own accord, but encourages other users to report violations. A Yelp spokesperson told the Daily Dot that each flagged review is evaluated by an internal team and then removed it it violates site rules.

Representatives from the Fiorina campaign did not immediately respond to a request for comment.

As of Tuesday evening, the post is still active.