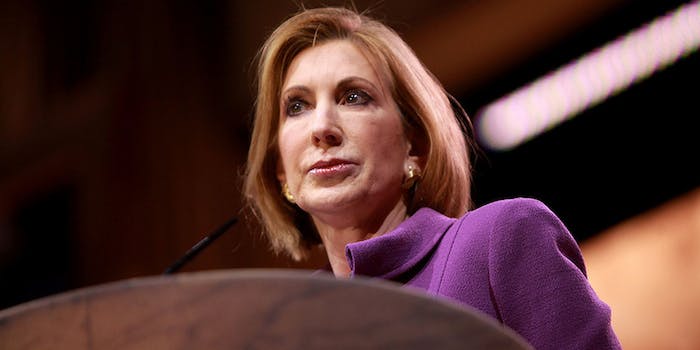 She she's right that marijuana and alcohol aren't alike—but not in the way she thinks.

“My husband and I buried a child to drug addiction,” Fiorina said, adding that millions of Americans shared that experience. “We must invest in the treatment of drugs.”

But Fiorina’s harrowing story turned out to involve an entirely different kind of drugs.

Fiorina’s daughter Lori died in 2009 after “drinking too much in college,” the former HP CEO and current presidential candidate wrote in her recent biography. Her daughter, she wrote, followed up that drinking with years of abusing prescription drugs.

“Like so many high-achieving young women, Lori also struggled with bulimia for years,” Fiorina wrote. “Despite her repeated stays in rehab, the combination of bulimia, alcoholism, and drug abuse took its toll. She was divorced and living in New Jersey when she died.”

Fiorina never mentions  marijuana in her biography, whether in connection with Lori’s death or otherwise.

While prescription drug abuse kills 44 people every day in the United States, marijuana has never resulted in an overdose fatality.

Earlier this year, Fiorina called recreational and medical marijuana legalization “a very bad idea” in part because the issue “lands very personally” with her due to her daughter’s death.

At the debate on Wednesday night, Fiorina argued that “we do need criminal-justice reform” to cure “the highest incarceration rates in the world” that exist because “two-thirds of the people in our prisons are there for nonviolent offenses, mostly drug related.”

“It’s clearly not working,” she said of mass incarceration over drug offenses.

But Fiorina also cautioned against “misleading young people when we tell them that marijuana is just like having a beer. It’s not.”

In fact, alcohol has led to approximately 88,000 deaths per year in the United States, according to federal research. Marijuana, a drug that has been consumed by more than 100 million Americans and which carries a diverse and not-yet-fully-understood set of medical effects, has never led to an overdose death.

Fiorina unintentionally admitted this when she argued earlier this year that “marijuana is not like having a beer with your buddies.”