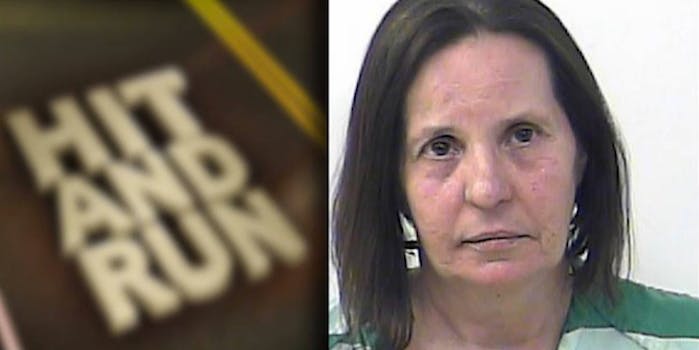 Of course it happened in Florida.

A Florida woman attempted to flee the scene of an accident, only to experience her very own 2001: A Space Odyssey moment when her vehicle went HAL 9000 on her and said, “I’m afraid I can’t do that” by reporting her to the police.

On Monday, a woman reported to Port St. Lucie, Fl. police that she had been struck from behind by a black car that immediately sped off. At around the same time, the police dispatch received an automated call from a vehicle involved in an accident.

That call came from a Ford Escort being driven by a woman identified as Cathy Bernstein. Over the course of a nearly five minute conversation with the emergency responder, Bernstein denied being involved in an accident despite her car’s report to the contrary.

“Everything is fine. The guy that hit me, he did not turn and he rushed to the point that I could not control that,” she told the responder at one point. When the operator attempted to confirm that Bernstein was involved in an accident, she again said, “No I haven’t,” and denied being hit by a car or hitting a car. “I did not hit anyone,” she insisted.

Newer Ford vehicles often come equipped with a feature called 911 Assist. The feature utilizes Bluetooth technology to automatically initiate a call to local responders when the vehicle has been involved in an accident. According to Ford’s documentation on the feature, 911 Assist places the call if impact “deploys your vehicle’s airbags—or, in some vehicles, activates the emergency fuel pump shut-off.”

Police learned after visiting Bernstein’s home that the airbag had indeed been deployed in her vehicle. The Ford Escort also had extensive damage on the front end and silver paint that matched the color of the victim’s car.

Despite the considerable evidence, Bernstein again denied to police that she was involved in an accident when confronted. She reportedly told police that she had struck a tree—though best we can tell, there is no metallic silver tree indigenous to South Florida.

After continued conversations with the police, Bernstein finally confessed to being involved in the accident, as well as lying to the emergency responder about the incident. Police later discovered that Bernstein had previously been involved in another accident and was fleeing from that incident.

Bernstein was arrested and taken to the St. Lucie County Jail. The victim in the accident was taken to the hospital, where she was treated for back injuries. The Ford Escort has presumably entered into the witness protection program.