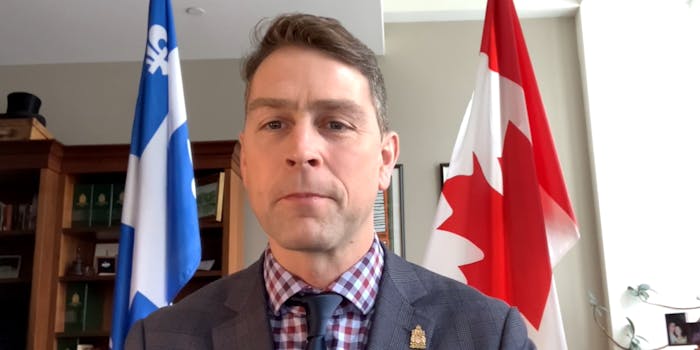 A Canadian lawmaker apologized after appearing naked during a virtual meeting on Wednesday.

The lawmaker, William Amos, was recorded in his office during a House of Commons meeting on Wednesday. Amos represents part of Quebec as a member of parliment.

A screenshot provided to CTV News reportedly shows Amos standing behind his desk between the Quebec and Canadian flags. The Montreal Gazette reports the hearing was not broadcasted publicly and only to lawmakers attending the virtual hearing. The Gazette reports that Amos did not seem to be aware that his camera was on.

In a tweet on Wednesday evening, Amos said it was an “unfortunate mistake.”

“I made a really unfortunate mistake today & obviously I’m embarrassed by it. My camera was accidentally left on as I changed into work clothes after going for a jog. I sincerely apologize to all my colleagues in the House. It was an honest mistake + it won’t happen again,” Amos tweeted.

CTV News reports Bloc Quebecois MP Claude DeBellefeuille, the party whip, noted the incident during the hearing and reminded lawmakers that there was a dress code before adding: “We have seen that the member is in great physical shape, but I think members should be reminded to be careful and control the camera well.”

You can read all of the CTV News report here.