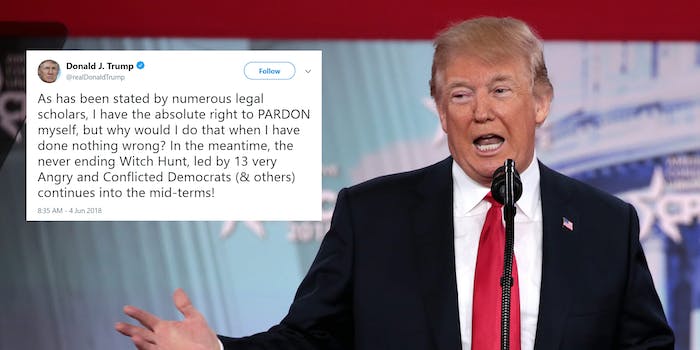 Trump on pardoning himself: Yeah, I can do that

The matter is settled, POTUS says.

Weighing in on a debate that’s been percolating since his presidency—but reached a tipping point in the past few days—President Donald Trump declared that he has the power to pardon himself.

Not that, you know, he ever would.

“As has been stated by numerous legal scholars, I have the absolute right to PARDON myself, but why would I do that when I have done nothing wrong?” Trump proclaimed this morning, while also using his favorite term for Robert Mueller‘s investigation into his campaign, again declaring it a “Witch Hunt.”

Over the weekend, Trump’s lead attorney and prominent television talking head, Rudy Giuliani, declared that Trump had the power to pardon himself.

However, Giuliani said the president probably shouldn’t, appearing on ABC’s This Week.

“I think the political ramifications would be tough. Pardoning other people is one thing, pardoning yourself is tough. Pardoning himself would be unthinkable and probably lead to immediate impeachment,” he said.

Giuliani also noted, like Trump did, that despite it being a topic of rampant speculation, that was silly because the president has no need to do such a thing despite their repeated insistence that he can.

“And he has no need to do it, he’s done nothing wrong.”

While Trump declared the debate settled this morning, constitutional scholars are torn on the matter. Trump could no doubt issue himself a pardon, but whether it would hold up in court—or whether the courts have the right to even rule on the matter—is unknown.