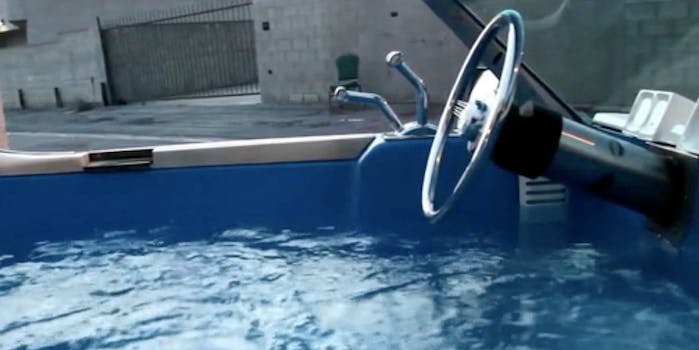 Luxury on a whole new level.

Unlike most Kickstarter entrepreneurs, the dudes behind the “Carpool Deville” have already built their masterpiece: a refurbished, drivable 1969 Cadillac convertible whose interior is a functioning hot tub.

Six years in the making, the aquatic automobile is in fact the third incarnation of an idea first developed in the mid-’90s, when these guys were undergraduate engineering students at McMaster University. Since then, they have labored tirelessly to perfect their original concept. The $10,000 they’re asking for—with a little over half of that in pocket and three days left to go on the campaign—is for costs associated with the next step in this gloriously goofy saga: the Carpool Deville will head to Utah’s famous Bonneville Salt Flats, a desert vista and storied racetrack where people have been setting land speed records for a full century. The idea is to claim the coveted and never-before-applicable title of “World’s Fastest Hot Tub”:

The Salt has seen its share of streamliners, speedster motorcycles, vehicles powered by electricity, fuel cells, rockets and jet engines. But it’s never seen anything quite like this. Nobody’s ever gone a hundred miles an hour in an open-air self propelled hot tub while sitting neck deep in soothing warm water. We aim to correct that mistake of history this August.

For a measly $1,000 donation, you’ll get to soak in the thing yourself (the vacation of a lifetime, surely). You can keep your so-called “hot rods”—here’s a car that really brings the heat.