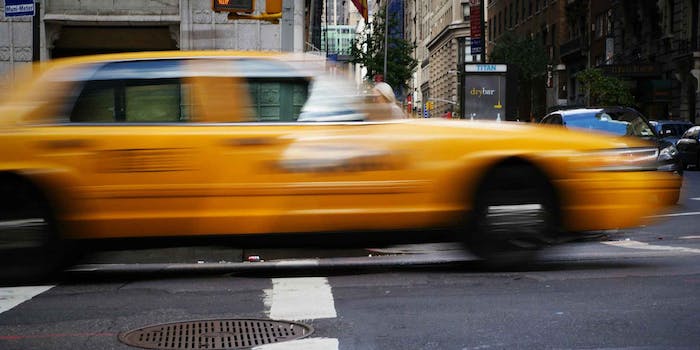 There are more Uber cars on the streets of New York City than there are yellow cabs, a symbol of the city once so ubiquitous that they inspired films and TV shows. Cabbies are hurting as they try to compete with Uber, but a startup thinks it can level the playing field.

Cabsolutely may have a silly name, but it’s serious about trying to put cabbies back in the driver’s seat of the transportation debate. Its aim is to give cab drivers the same technology that has made Uber to the go-to option for quickly hailing rides.

The app uses a cloud-based dispatch system instead of the typical, archaic radio dispatch system on which many cab companies rely. Users can tap “Request Ride” to alert the nearest available cabbie that they want to be picked up. The driver will show up and take rider to their destination, at which the passenger pays through the app instead of fumbling around with cash.

There is a catch, though: Cabsolutely depends on cab companies agreeing to use its system. The more companies sign up, the more Cabsolutely benefits. Cabbies may pressure their bosses to join the service so they don’t forfeit potential customers to competitors who happen to be closer to a rider. There is no brand loyalty when it comes to Cabsolutely; it’s all based on proximity.

For the rider, it’s pretty much a win-win. They will always be picked up quickly because whomever is closest gets their ping. They also get the assurance that the person behind the wheel is a licensed, trained, and insured professional—a promise that Uber cannot make.

Cabsolutely builds in plenty of tools that make it appealing to cab companies. The platform on the business side is packed with technology that isn’t otherwise available: performance metrics and data on drivers, constant connectivity between dispatch and drivers, and real-time tracking information. Cabsolutely reveals a huge amount of data that companies can use to improve employee performance.

Cabsolutely probably isn’t available in your city yet. If its plan succeeds in New York, though, the company’s goofy name may soon become as recognizable as the yellow cabs it sends to your doorstep.