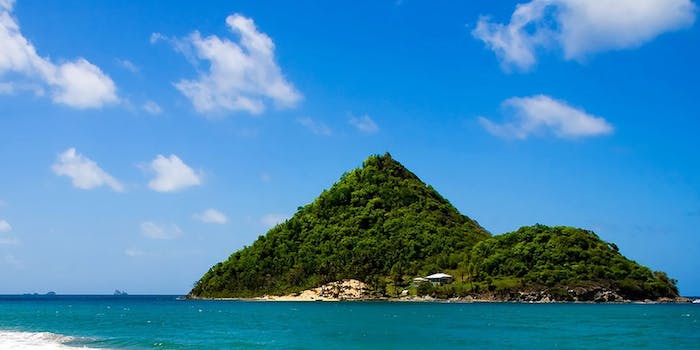 How to buy a private island online

Careful research and a few willing friends could land you a small slice of heaven.

When it comes to establishing your own little island paradise, Nova Scotia may not be the region that first springs to mind. But as a few buddies recently discovered, Canadian wilderness is a lot more affordable—and accessible—than sandbars in the Caribbean or South Pacific. So they bought some of it—through a website.

In a jubilant announcement, a young man named Tynan (former pick-up artist, guru of RV living, devoted minimalist, and founder of SETT, a “high-engagement” blogging platform) described how he and nine other investors had gone in together on a relatively inexpensive island. “Having a random patch of land somewhere holds almost no appeal,” he wrote, “but an island is totally different. An island is like your own little country, with complete control of everything within its borders.

“Right now we have a fun place to camp and explore, but I hope that someday our little island becomes a retreat where we can go work, read, or get away from the city. Further down the road I hope it can be like a private summer camp for our families. There’s also been some talk of holding a really awesome workshop/event there with some of our blogger/tech friends.”

Those goals aren’t too surprising, given that everyone from billionaire libertarians and artists to redditors and tech geeks have imagined island refuges in which like-minded creatives and intellectuals might assemble outside the influence of Big Brother. For many readers, the revelation here was that there’s a website geared toward this exact sort of real estate deal: Private Islands Online has listings for beachy and wooded utopias the world over, with prices ranging from just a few thousand dollars to tens of millions.

It was there that Tynan found the right island for himself and his friends, about an hour away from the Halifax airport, which itself is a 10-hour drive from Boston. We had a few questions about what manner of research island-shopping requires, not to mention plans for development—and what exactly you can get away with in isolated, unspoiled nature. “There’s no land in the world where you can become a sovereign micro-country,” Tynan told the Daily Dot by email when asked about the limits of the group’s political independence. In fact, you’d have to dump tons of sand on a reef and create your own land mass to accomplish as much (but don’t be shocked if it doesn’t work out). Even so, there’s a functioning government for Tynan’s retreat: “Because we have ten people involved, we have formed our own methods of getting decisions made, and bylaws to restrict who can visit the island and who shares can be sold to.”

The group bought the island from Matthew Murphy, someone not unlike Tynan. “The seller was a private owner who had similar reasons for wanting an island,” he said, “but he relocated too far away from it to make it work.” Murphy commented on Tynan’s initial post, expressing fondest wishes, and Tynan said he was welcome to come back and visit anytime.

Nevertheless, Murphy’s story one valuable lesson for any would-be island-hunters out there: this takes commitment.

“I’ve been looking for an island that makes sense for years,” Tynan explained. “There are some great ones for sale in the South Pacific, but they’re very difficult to get to. There are, of course, islands more convenient than ours that are much more expensive. We chose ours because it was a good mix of affordable, convenient, and spacious.” Then the real work began. On their first visit, the islanders “made bonfires, caught wild crabs, cut a trail through [their] forest, and spun around the harbor on a boat” ordered from Amazon. It sounds like an episode of Survivor.

They began accumulating plans to “build a communal building with a shower, kitchen, lounge, and bathrooms,” as well as private sleeping structures, “gardens, a fire pit,” and other infrastructure. “Building something like this with your friends is the most fun part,” Tynan noted.

These ambitions worried some readers of Tynan’s blog, who commented on the delicate virgin ecosystem and suggested he look into “permaculture,” a theory of sustainable agriculture that operates in balance with a natural environment. “There are thousands of trees on the island, and we plan on keeping it that way,” Tynan stressed. “Our goal is to create a really relaxing productive place that’s integrated with the nature around it, so I don’t think we’ll have any problems.”

Except for the unforgiving weather, that is. “In the winter it gets really cold, but it’s nice in the summer—70s and 80s. Eventually we’d like for the island to be inhabitable year-round, but for now it will just be a summer camp.” Makes sense: Tynan also said exploring his purchase made him feel like a kid again.

All the same, there are some very adult concerns in play. Asked about how others in the market for an island might best go about securing one, Tynan put a premium on collectivism. “Definitely don’t go at it alone,” he said. “Islands can be expensive, and the infrastructure can cost a lot as well. It makes a lot more sense to have an occasional-use place if you only have to cover [a tenth] of the ongoing expenses.” Getting tangled in the concrete logistics of colonization, we might forget a critical piece of the puzzle, one that surely looms large in the mind of anyone who has remotely considered, or even daydreamed about, island ownership: When you buy an island, you get to name it, right?

“We’re in the process of voting now,” Tynan reported. “It looks like the name will probably be Phoenix Island. Candyland was a surprisingly close contender.”

Private Islands Online could not be reached for comment.