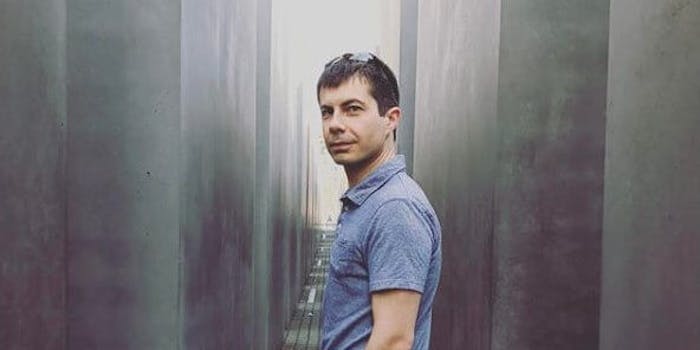 Running for president is sort of like juggling dynamite 24/7. It’s dizzying, exhausting, and any minute, things can unexpectedly blow up in your face big time.

That’s exactly what happened to Mayor Pete Buttigieg, a Democratic candidate for president, this weekend.

Yesterday, NBC reporter Ben Kesslen dug up an old picture of Buttigieg that his husband Chasten posted on Instagram. In the April 2017 pic, a Mona Lisa smile dances across Mayor Pete’s lips as he looks toward the camera in ‘come hither’ fashion.

“This guy,” the caption gushes of the fetching photo … which was taken at the Holocaust memorial in Berlin, as Kesslen noted.

Put into this context, the picture quickly went viral. People were naturally pretty horrified by a thirst shot at a memorial to genocide.

“Wow. Haven’t seen anything this tasteless since that clown who took a picture with a thumbs ups while his wife held an orphaned infant whose parents were murdered while trying to protect him,” said one. “He’s like the tourists that used to pose [in] front of the WTC rubble, smiling and flashing peace signs,” yet another tweeted.

Comments on the original Insta post similarly exploded. “This guy. Is. Disrespectful,” “idk about this one chief,” and “repulsive,” are a sample of the many negative reactions.

As comments, retweets and likes piled up, Kesslen tweeted, “Did I cancel Pete?”

In light of this, i’d like to highlight my fav deep cuts off of chasten’s insta pic.twitter.com/2LSTkEsJzB

One might say I have high high hopes that this revelation will be enough to take Buttigieg back down to single digits in Iowa.

Oh problematic photos by instagays at the Holocaust memorial in Berlin are a whole subgenre of Instagay shenanigans.

logging on to twitter dot come to see Petey B. and Chasten’s Holocaust memorial pic pic.twitter.com/Hk2kSOA0ei

At least a few were appalled that anyone would use the photo against Buttigieg.

“As someone who lost relatives in the Holocaust, including my great grandparents, your using this to smear Pete is absolutely appalling to me. Try a little self-reflection,” one woman tweeted.

Most were just horrified, however.

I decided to make an edition for Pete pic.twitter.com/4XxJbakv0A

Buttigieg is gonna be the dem nominee and Trump is gonna spend the cycle calling him Holocaust Pete, at which point hopefully someone will euthanize me like a dog

Hmm @skinny412 with a link suggesting that there’s more to this Buttigieg/Holocaust thing https://t.co/ITBZ4WcxBw

To be fair, it is a great picture. Nevertheless, it’s probably a pretty good rule of thumb to refrain from posting glamour shots from your trip to a memorial to genocide, regardless of how tasty the pic turns out.

Critics were pretty unmoved by the explanation that people often take pics at this exact spot. Nor was the crowd particularly swayed by the argument that, in fact, as artist Marc Adelman’s 2012 installation of 150 similar photos documented, hot pics at the Memorial to the Murdered Jews of Europe is kind of a subgenre on gay dating sites.

“When I first saw the images I thought they were captivating but somewhat inexplicable; why did each of these men pose in the Holocaust Memorial and upload the image to their dating profile?” Adelman told Hyperallergic. “Why strike these playful, flirtatious, and times overtly sexual gestures at such a historically vested public monument?”

The next debate is Wednesday. Maybe someone can ask and get an answer.