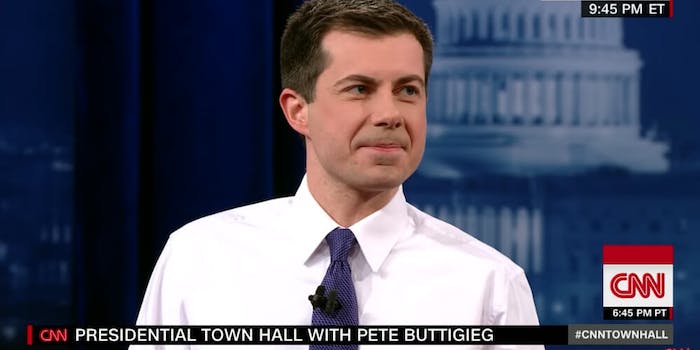 In the original clip, Buttigieg was not met with applause from the audience.

The campaign for Democratic hopeful Pete Buttigieg was called out on Friday for adding applause to a clip of Buttigieg at a CNN town hall.

The clip was from a town hall held in Austin, Texas, on March 10, 2019. The former South Bend mayor, who is now 38 but was 37 at the time of the Austin town hall, was answering a question from an audience member about the “limitations” and “advantages” his age would grant him should he become president. (Buttigieg would be the youngest president to ever assume office.)

“To me, that is not just a concern for our generation, it’s a concern that calls on us to build an alliance among generations to try to make sure that the future really is better than the past,” Buttigieg says in response to the question, prompting applause from the audience–well, according to the clip, that is.

One year ago, @PeteButtigieg called on us to build an alliance among generations to make sure the future really is better than the past.

The campaign tweeted out the old clip to promote Buttigieg’s most recent town hall on Feb. 6.

The Center for Democracy Action first noticed the added applause and tweeted out a side-by-side of the original clip and the “altered video,” complete with a #SneakyPete hashtag. In the original clip, Buttigieg’s answer was not met with applause from the Austin audience.

The Daily Dot has reached out to the Buttigieg campaign and CPD Action.