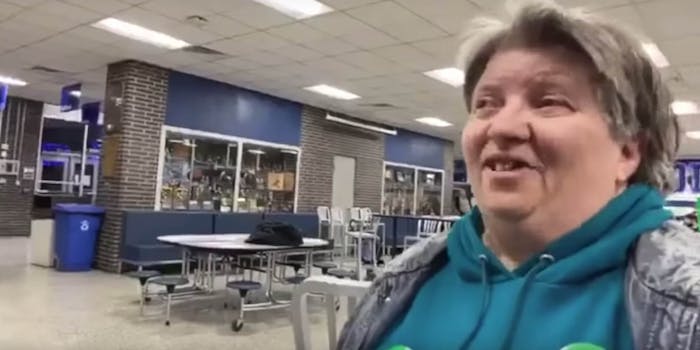 'I don't want anybody like that in the White House. So can I have my card back?'

A viral video shows a woman regretting her vote for Pete Buttigieg after finding out he’s gay during the Democratic Iowa caucus.

Rob Beschizza, who has just over 4,000 followers on YouTube, shared the video on Tuesday. It’s already garnered more than 33,000 views:

“So are you saying that he has a same-sex partner?” the woman is seen asking at the beginning of the two-minute video.

“Pete?” asks another woman, who is seen wearing a sticker identifying her as a precinct captain. “Yes.”

“Are you kidding?” the voter asks.

“He’s married to him, yes,” the captain responds.

“Well then I don’t want anybody like that in the White House,” says the woman, and extends her hands, “So can I have my card back?”

“I don’t know, you signed it,” the captain says with a nervous laugh. “We could go ask.”

“I never knew that,” says the woman.

The women then go back-and-forth on what the Bible says about same-sex marriage.

“How come this has never been brought out before?” the voter asks. Buttigieg’s identity as a gay man and the “first openly gay candidate” has been well documented in the media.

“It’s common knowledge,” the captain says, while a woman next to her nods her head.

“I never heard it,” says the voter.

“We can talk to someone if you need to talk to them about this,” the captain says. “I don’t know the rules of it… But I guess what I would like you to [do is] just dig deep inside… Should it matter if it’s a woman or if it’s a man or if they’re heterosexual or homosexual? If you believe in what they say?”

“You have a total right to your opinion and I’m not trying to tell you to think otherwise,” the captain says continuing to keep her calm. “I just ask you to look inside your heart because you sound like a Christian woman to me. I am a Christian woman, and my God….”

“But then you know what the Bible says,” the voter responds.

“So you must not believe it then if you think it’s OK for somebody to be married to a same-sex person,” the voter says.

“No, I think we’re just interpreting it differently and that’s OK because everybody gets to have their own beliefs,” the captain says. “But what I teach my son is love is love and we’re all human beings.”

On Twitter, many people joked about the video. But others were concerned that it represents the lack of information some voters have about presidential candidates.

In the video description on YouTube, Beschizza wrote the interaction is “a stark reminder of the distance between media and reality.”

Makes you wonder if people even know who is running! Buttigieg has not hid the fact he is gay. Reminds me of the first time Bill Clinton ran. Some foolish women voted for him because they liked his looks!

I'm not sure what's scarier here.. HOW could this woman have NOT known Pete Buttigieg was gay by now?? HOW uninformed IS this electorate?

Don't you have to WORK to be that ignorant in 2020? Maybe I really AM in a bubble.

Many applauded the captain for keeping her calm and responding with respect.

I applaud @PeteButtigieg ‘s precinct captain here for her composure in trying to appeal to this woman’s humanity https://t.co/YmQMkTZzIJ

This girl needs a raise .@PeteButtigieg . Also where the hell has this woman been, “why hasn’t that been brought up before”, “umm, it’s common knowledge”.