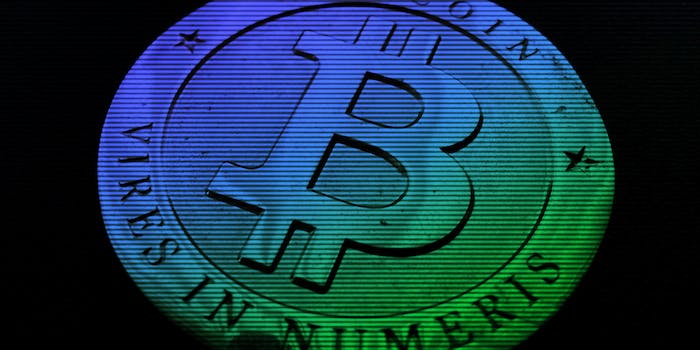 Don't trust everything you read on the Internet.

The fictional cryptocurrency started in 2011 as a blog to make fun of and satirize the Bitcoin community.

Thanks to Buttcoin.org’s editorial freedom, founder borderpatrol and editor killhamster regularly published headlines like “The $22,484.00 Butterfly Labs Mini Rig bitcoin miner is a huge, broken, unstable piece of shit” and “This is quite possibly the most brilliantly useless bitcoin mining rig ever created” to a small but growing audience eager for a raw look at how complicated and preposterous Bitcoin can be.

Last winter, all that changed.

That’s when one of the popular targets of Buttcoin’s criticisms, Butterly Labs, purchased the site, shut out its founder, and rewrote stories to show the Bitcoin mining rig company in a positive light.

All of this was detailed in a post Friday from borderpatrol and verified by killhamster in an interview with the Daily Dot.

At the time, borderpatrol was tired of running the site and busy with school and work. He asked Jeff a lot more questions and discovered that he wanted to keep the site as “The Onion of Bitcoin,” with borderpatrol at the editorial helm for another six months.

The two men signed a contract and borderpatrol transferred the domain over to Jeff’s daughter, who he claimed was in journalism and eager to learn about the online publishing world. Borderpatrol and killhamster wouldn’t say how much Jeff paid for Buttcoin but stated it was a five-figured amount and enough for a “really nice Christmas.”

For borderpatrol, it wasn’t a good New Year’s.

Another two Butterfly Labs-related stories on Buttcoin were also edited. One of the stories was about Butterfly Labs, about it faking CE certification for its mining rigs and another discussing a Wired article where a reporter tried out a rig and was unimpressed.

Each of these three stories were some of the most popular on Buttcoin and would turn up high in Google when “Butterfly Labs” was searched.

“It was obvious to me that the purpose of purchasing the site was to simply remove the negative articles that were destroying their search traffic and making them look bad,” borderpatrol said.

Butterfly Labs has been dogged by controversy since it launched in 2011. First came a series of lawsuits related to mining rigs not being delivered to customers on time. The failure to deliver rigs on time is a big deal because the computing power needed to mine bitcoins grows increasingly difficult as each day passes. In June, all of this drama earned Butterfly Labs the title of “Bitcoin’s Most Controversial Startup” on Vocativ.

Jeff (or whoever mans the Buttcoin contact email) did not immediately respond to our request for comment.

Borderpatrol is still locked out of the site, while killhamster continues to publish on Buttcoin regularly. Jeff’s daughter never materialized, they said.

“Nobody has touched any of my articles and I pretty much have free reign over the site and Twitter, though I’ve lost my administrator privileges in the site’s backend,” killhamster said. “Anyway, we’ve had quite a laugh over this. Lots of Reddit Bitcoiners are trying to frame this as us getting scammed, but we made a pile of money off of what was otherwise an unprofitable joke website. How exactly did we get scammed?”

Photo by Zach Copley/Flickr (CC BY 2.0) | Remix by Jason Reed